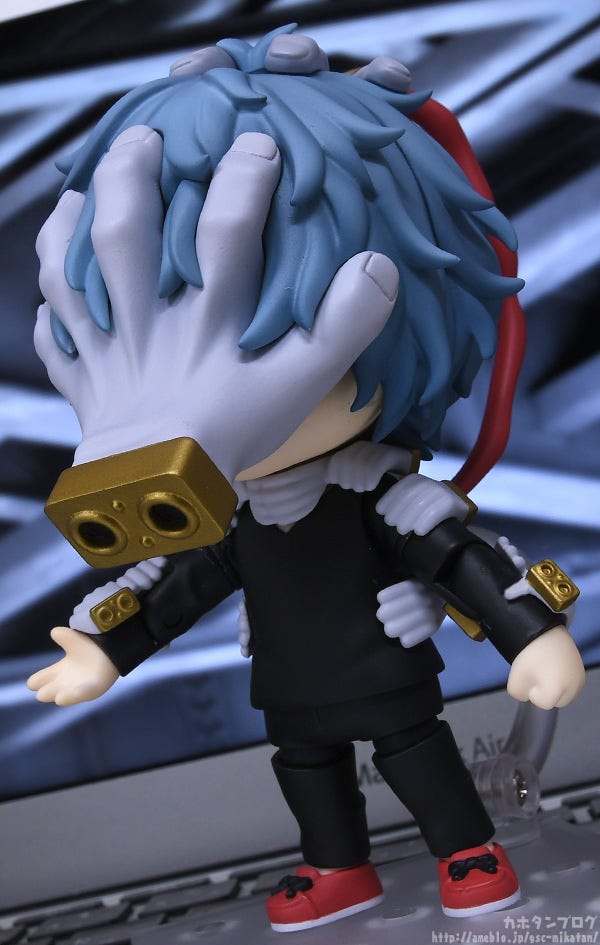 From the popular anime series “My Hero Academia” comes a Nendoroid of Tomura Shigaraki, the leader of the League of Villains. The numerous hand parts that cover his body are all removable. He comes with two face plates including his scornful standard expression and a spine-chilling crazed expression.

Special hand parts to display him using his ‘Decay’ Quirk are included along with interchangeable front hair parts, allowing you recreate all kinds of scenes and situations.

Be sure to add him to your collection, and enjoy recreating your favorite scenes from “My Hero Academia”!

“After all this waiting, the heroic piece of trash shows up.”

From “My Hero Academia” comes a Nendoroid of the leader of the League of Villains: Tomura Shigaraki! ◎

The hands that cover his body have been carefully recreated in Nendoroid form! (All those hands covering his body make for quite an impressive sight!)

I like how you can see just a bit of skin between his pants and shoes. ( ･ㅂ･)و ̑̑

His elbows and shoulders are articulated making for easy action posing!

Whatever pose you’re going for, you can adjust it till it looks just right! ▲Look at all the hand parts on his neck and shoulders!

Looking from the top, you can see both the hand at the front and the back of his head have both been carefully sculpted!((｀・∀・´)) ▲The nails and joints are all sculpted like real hands!

The hands on his body can also be removed for poses like this! ◎ Additionally, by using the interchangeable cowlick hair part, you can recreate his hairstyle with the hand on the back of his head both on or off! ◎

It might be a bit hard to see his face from the front, but let’s take a look from the side… |・д・´) Tomura’s creepy smiling face has been carefully recreated in Nendoroid size! You can even see the mole below his mouth. First is his standard expression! While his mouth is smiling, if you take a close look at his eyes, you can see he isn’t particularly happy… (∩´﹏`∩)

The unique texture of his lips has been recreated as well! Both front hair parts with and without the hand attached are included, allowing you to display him either way! ◎

Next, for his second expression…

“Let’s have some tea, Izuku Midoriya.” His bloodshot eyes and toothy smile are quite unsettling… his mouth has been sculpted carefully for maximum effect.

This was actually the first expression we saw when we looked under the hand! Just by changing out his front hair parts you can take some terrifying pictures!ヾ(。>д<)

He also comes with a miniature handheld size hand allowing for poses like this! ◎ This is based off the hand that is on the front of his face, but in a smaller size for him to hold! ♪ Available for preorder from the 9th of July to the 8th of August! Preorder at the GOODSMILE ONLINE SHOP until the 1st of August at 12:00JST