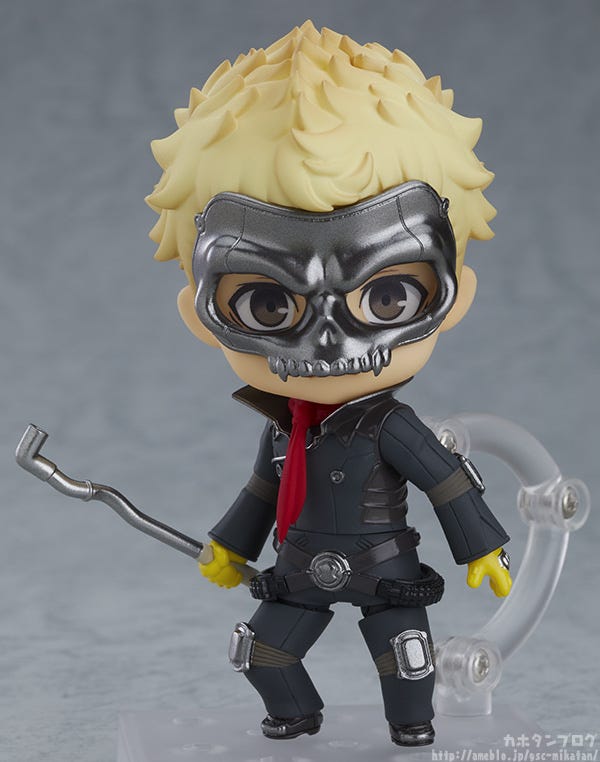 From the popular anime series “PERSONA5 the Animation” comes a Nendoroid of the troublemaker of Shujin Academy also known as Skull, Ryuji Sakamoto, in his phantom thief outfit! He comes with his iron pipe, shotgun and a miniature-sized mask he can be posed holding. Additionally, a cut-in sheet is included to recreate Persona summoning sequences and All-Out Attack finishes.

He comes with three interchangeable face plates including a standard expression, a grinning expression and a confident expression. Be sure to add him to your collection, along with the other Persona series Nendoroids!

“Gonna knock you out!”

His spiky blonde hair has been perfectly brought down to Nendoroid size as well!

In order to recreate Skull’s somewhat poor posture, his standard leg parts are just slightly bent at the knee. ♪ He comes with three face plates including his standard expression shown earlier, as well as a grinning expression! ▲Even his fingers have been perfectly recreated for this pose! ♪

His shotgun for long range combat is included as an optional part, so have fun posing him in the middle of battle! =͟͟͞͞( •̀д•́))) A miniature handheld size mask is also included, allowing you to easily recreate scenes with his mask off! ◎ As with the other Persona 5 Nendoroids, a cut-in sheet is included as well to recreate Persona summoning sequences and All-Out Attacks! Attachment parts are also included making it easy to pose him with the sheet! ◎

He looks great alone, but I would also recommend posing him with the other Phantom Thieves! (●･∀･)人(･∀･○)