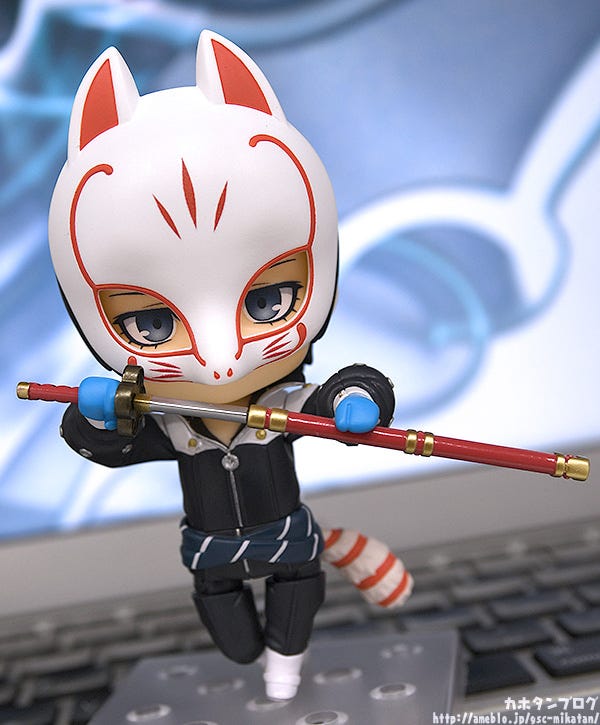 From the popular anime series “PERSONA5 the Animation” comes a Nendoroid of the handsome young man with unique sensibilities, Yusuke Kitagawa, in his phantom thief outfit! He comes with his sword, gun and a handheld-sized mask as optional parts. Additionally, a cut-in sheet is included to recreate Persona summoning sequences and All-Out Attack finishes!

He comes with three face plates including a standard expression, an angry expression and a closed-eyes expression. His mask is removable making for a total of 6 different face display options. Be sure to add him to your collection, along with the other Persona series Nendoroids!

The eye-catching art student from Kosei High School, Yusuke Kitagawa, has been transformed into an adorable Nendoroid! ◎

The pose of him drawing his sword has been brought down to Nendoroid size!

His tight-fitting uniform has been recreated in Nendoroid form very carefully. ♪ His tail accessory features a joint at the base, allowing you to rotate it for easy posing!（・∀・*）

In addition to his masked front hair parts, unmasked parts are also included! ▲Enjoy seeing how the mask changes his expression! Use them to recreate his All-Out Attack pose! (੭ु ›ω‹ )੭ु⁾⁾ He comes with three face plates including his standard expression seen above, along with a fiercely emotional angry expression! ((｀・∀・´)) ▲Posed with his gun, you can see his fighting spirit!

By the way, here’s how it looks with his mask on! ◎ Finally, his third expression is his elegant closed-eyes expression! ★ You probably also noticed that interchangeable parts are included to show his sword drawn as well! ♪

By the way, I also really like posing him holding the mask with his angry expression! ★ A cut-in sheet is included as well! You can recreate the often-seen baton touches from the game too if you display with Nendoroid Joker! ▲Create all kinds of scenes in the palm of your hand! ☆

Available for preorder from the 14th of March (Thu)!