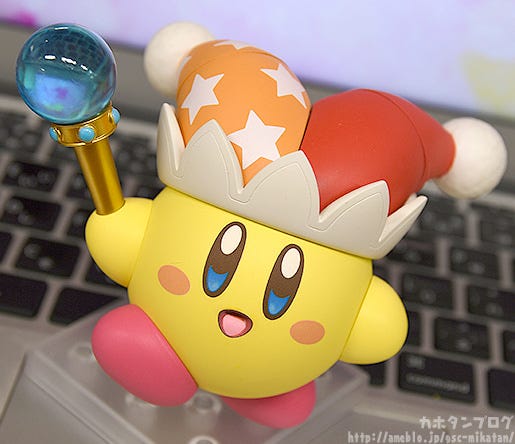 From the popular “Kirby” game series comes a Nendoroid of Beam Kirby! The Nendoroid makes use of a number of magnets for posing, making his movements smooth, natural and easy to pose!

He comes with three face plates including his standard smiling expression, an expression with his mouth wide open to display him using his inhaling ability as well as an expanded expression to show him filled up after inhaling! Use the included beam optional parts to display Kirby using his beam ability!

Have fun displaying with the now available for preorder Nendoroid Kirby and Nendoroid Meta Knight (both sold separately) for even more fun! Be sure to add him to your collection!

The lovable Beam Kirby has been transformed into a Nendoroid! ▲I love the fluffy look of his pom poms!

By the way, his two-branched hat is articulated!

This makes it even easier to pose Kirby!

Just like Nendoroid Kirby, Kirby’s arms and legs are magnetic, allowing you to easily pose him however you’d like with his base and support arm!

In addition to his smiling expression face plate shown at the beginning, he also comes with the cute straight-faced expression shown above! Woah! These stars coming from his staff…! A special support arm and base are included, making for easy display!
(｡･ㅂ･)ﾉﾞ✧*。

Next his third expression is his inhaling expression, showing him with his mouth wide open inhaling enemies! A bit different from Nendoroid Kirby, Nendoroid Beam Kirby has a more serious expression on his face when inhaling!

His hat can be removed too, so display him however you’d like!

Finally his fourth expression is his expanded expression! ( ‘༥’ )

This part is a bit different from the other face plates in that it shows Kirby a bit more expanded than usual!

▲It’s quite the difference!

So in total you get the figure, 4 face plates, hat parts, staff and gripping hand parts, and beam parts! Have fun mixing and matching when you take him home! (●･∀･)人(･∀･○)

On the 20th, the following products will be available for rerelease preorder as well! Keep your eye on the Good Smile Company official site for details!