Nendoroid Rize (Is the Order a Rabbit?) 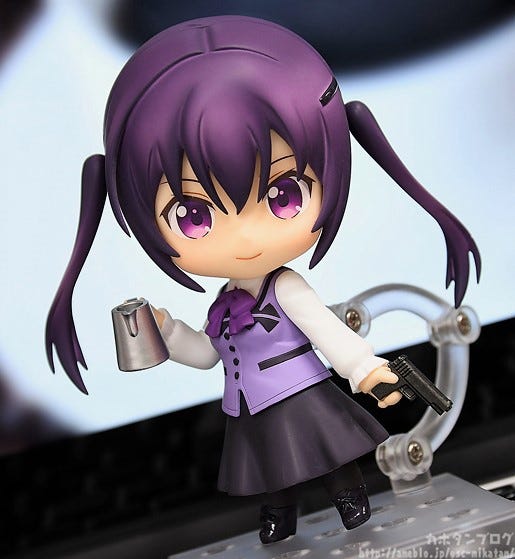 From the popular anime “Is the Order a Rabbit?” comes a Nendoroid of Rabbit House’s Rize! She comes with three face plates, including her confident standard expression, a commanding expression, for when she’s giving out orders, as well as a smiling expression with closed eyes!

A milk pot, coffee cup, her model gun and the rabbit, “Wild Geese”, are all included as optional parts! A plastic sheet based on a camera grid is also included! Be sure to add her to your collection!

Finally, the 5th Nendoroid in the series!  Rabbit House’s part-timer that works with Chino and Cocoa, Rize Tedeza also known as Rize has arrived in adorable Nendoroid form!

Her purple uniform is adorable…!

She is the fifth Nendoroid in the “Is the Order a Rabbit?” series, after

First let’s take a look at her milk pot and coffee cup!

You can even display her pouring the milk! Σ（＠ω＠）

The poured milk part is included, so you can recreate the latte art making scenes! I wonder what kind of picture she’s making…?

In addition to her standard expression, a commanding expression is also included!

“When you speak to a superior, end your sentences with ‘sir’!”

It’s a face very fitting of Rize in military mode. Her stern finger-pointing pose… so cool! Her twintails are also movable!

Before introducing her 3rd expression, let’s take a look at… By the way, there’s a swivel joint in his neck, allowing his neck to move!

You can use this to make a very Wild Geese-like looking away pose.

Let’s take a look at her third face plate, a smiling expression with closed eyes! Also, a plastic sheet based on a camera grid is also included! Ah, this sheet looks like the camera grid of Cocoa’s digital camera! It comes with a special stand, so you can use it with any character you’d like!

“I’ll take a picture of you too, Rize!

Crane your neck a bit, and put your hands up to your mouth!” Ah… this smile is truly a force to be reckoned with… To celebrate the release of the 5th Nendoroid, I asked for a comment from Nendoroid Rize’s Sculptor, Z4.

Finally all 5 characters! Now you can really reenact scenes with all 5 of them from the series…

I’ve been following “Is the Order a Rabbit?” all the way back before the anime version was announced.

I never thought I’d be able to direct the sculpting and paintwork of the figures of a series I love so much! I was so happy when I had gotten the news.

Originally, we hadn’t planned Rize to have her “commanding expression” but I did everything I possible could to make it happen!

We wanted to make it so everyone buying the figure would be able to make all kinds of poses, from her cool poses holding her gun to her cute poses while holding Wild Geese, and I would be so happy to see people enjoying that!

Thank you, Takahiro… I mean Z4！

All five of them, together at last! They just make you feel all warm inside…

Be sure to add them all to your collection!

She’ll be available for preorder from the 4th of September (Tue)!
Keep your eyes on the Good Smile Company official site for details!
Preorders from the GOODSMILE ONLINE SHOP will receive a Latte Art Coffee part as a purchase bonus!
“Hmph… I told you I wasn’t that good at this!”
“No, this is… more than good…
this isn’t something just anyone can do, you know!?” Her Tank Latte Art has been expertly recreated!