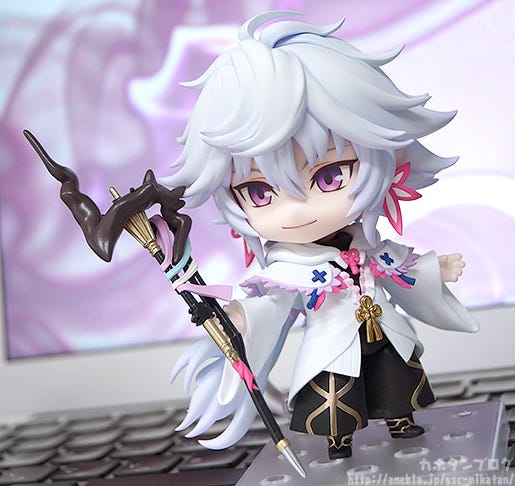 FGO Fes feels like it was so long ago and yet not even a week has passed yet!! Today I’m going to be taking a look at one of the figures that was on display at the event…
Nendoroid Caster/Merlin! From the popular smartphone game “Fate/Grand Order” comes a Nendoroid of the Caster servant, Merlin! He comes with two plates including a standard expression, as well as the familiar expression of him talking about the King! His staff and sword are both included allowing for various scenes from the game to be recreated in cute Nendoroid size! Be sure to summon the adorable King Maker into your collection!

“Relax, relax. If you panic you’ll flub the spell.”

From Fate/Grand Order comes a Nendoroid of the world pre-eminent King Maker and Caster servant, Merlin!!  His impressive hairstyle, refreshing smile and overall iconic appearance has been beautifully captured in Nendoroid size! The parts of his hair at the back are separated into two parts both attached with a joint allowing them to be moved around to better match your display! ▲ The amount of detail to his hair is amazing!

He comes with both his staff as well as his sword as optional parts! Both can be held in either hand allowing for a variety of different combinations when posing him! The familiar expression of him talking about the King! I can just imagine his gentle, nonchalant voice in my head!

Be sure to add the adorable Caster servant to your collection!
Nendoroid Caster/Merlin! In addition, this deluxe version will also be available!★ From the popular smartphone game “Fate/Grand Order” comes a Nendoroid of the Caster servant, Merlin! This “Magus of Flowers Ver.” is a special edition of Nendoroid Caster/Merlin that comes with additional parts! He comes with three face plates including a standard expression, the familiar expression of him talking about the King as well as a gentle smiling face!

Optional parts include the staff and sword included with the standard version, as well as a huge set of additional parts including the “Hero Creation” technique, flower parts to place around his feet as well as Excalibur: The Sword of Promised Victory. Be sure to summon the adorable King Maker into your collection!

“Let us speak of the King…”

Along with everything that is included with the standard version of the figure, this version also includes Excalibur: The Sword of Promised Victory as well as flower parts which can be placed at his feet and a smiling face plate! He also comes with effect parts to recreate his “Hero Creation” skill in figure form! Note that the main Nendoroid itself does not differ in anyway from the standard version – it simply comes with a selection of additional parts! ■ The following parts are only included with the Magus of Flowers Ver. ■

Simply select that version that better suits you!

More details will be available on the GSC Website tomorrow! ♪ Preorders for many products at the GOODSMILE ONLINE SHOP are closing soon! Here are the products closing on the 2nd August 2018 (JST)!