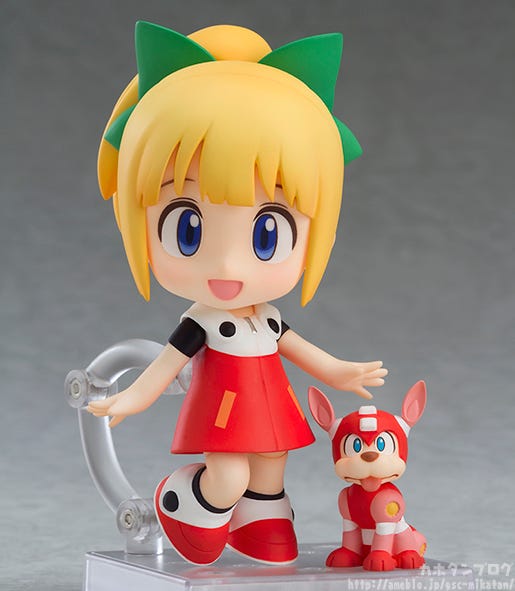 I can’t believe it’s already the end of January! WonFes is just around the corner! From Mega Man 11, the latest upcoming game in the Mega Man series made to commemorate the 30th anniversary, comes a Nendoroid of Roll in her new costume! She comes with three face plates including a standard expression, an upset expression and a proud smiling expression.

In addition a Nendoroid sized version of Mega Man’s reliable companion Rush is also included, based on the original designs illustrated for the new game! Roll also comes with her cleaning device and an E Tank as optional parts to display with her. We hope you’ll look forward to this cute Nendoroid of Roll together with the upcoming game!

A Nendoroid of Roll based on her design from Mega Man 11!

A Nendoroid of Roll wearing her newly design costume for Mega Man 11, which is due to be released as a part of the Mega Man 30th anniversary! She still retains the classic red and white design but it but has a much more modern design with a little hoodie! ☆ Plus the faithful robotic dog Rush is also included with her!

He is posed panting with his cute tongue and tail all adorably shrunk down to Nendoroid size to display with Roll or the previously released Nendoroid Mega Man! ♪

On that note, this is actually the 6th Nendoroid related to the Mega Man series! Let’s take a look at what has been released so far… Plus she also comes with this upset face plate!

She looks so cute even though she is upset!! Plus as she is a house keeping robot she also comes with her cleaning device to display her hard at work… or instead holding it in a slightly more aggressive stance like below! ♪ ▲ Note the detailed little bristles on the end of the device!

Plus she also comes with one more optional part… She can be posed holding it with both hands like above making for a very cute pose!! Be sure to display her in all sorts of different situations if you choose to add her to your collection!

She’ll be up for preorder from the 1st February!☆

Keep your eyes on the Good Smile Company Official Website for more details.