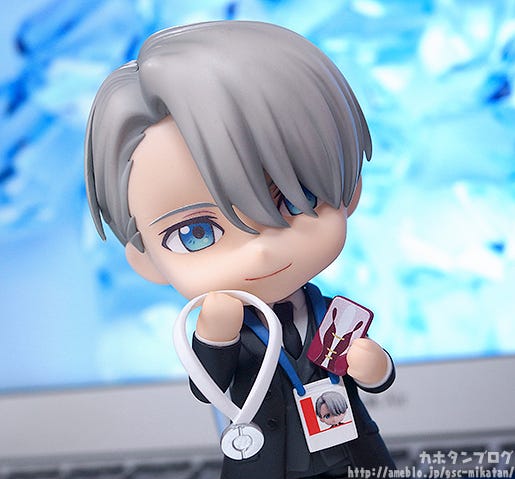 The sun has started setting rather early here in Japan now! Can you believe there is less than a month until the end of 2017?! From the popular anime series “YURI!!! on ICE” comes a Nendoroid of Victor Nikiforov wearing his coach outfit! He comes with two face plates including a crisp standard expression as well as a amazed expression for when he watches Yuri’s performance.

Optional parts include his coach pass, a smartphone as well as the silver medal that Yuri won during the Grand Prix final! Be sure to display him together with the previously released Nendoroid Yuri Katsuki: Free Skating Ver. and recreate various scenes from the series!

From the series that has gained fans all over the world, “YURI!!! on ICE”  comes a second Nendoroid of Victor Nikiforov, this time wearing his coach outfit!

His lovely long coat and gentle smile are ready to look on and watch over Yuri, but the Nendoroid also captures that strength of his character as well! He even has his coach pass around his neck, complete with a Nendoroid photo! ▲ Even from the back his long coat makes him look very elegant!

This time around his standard face has a slightly crisper, perhaps more serious look when compared with the standard expression that was included with the previously released Nendoroid Victor Nikiforov! Compare the two different expressions above and below and I think you’ll notice the differences! As you can see above, his coach pass can also of course be removed, and he also comes with his smartphone complete with the cover based on his skating outfit! The amazed expression from when he saw Yuri’s impressive performance!

Those wide open eyes with a sparkle in them, blushing cheeks and straightforward gaze!! The expression looks so good in Nendoriod size!

Compared with his initial expression you can instantly get a feel for just how amazed he is! This product only comes with these two face plates, but don’t forget that you can always exchange face plates with the previously released Nendoroid Victor or other Nendoroids for even more display options! ((´д`●))三((●´д`)) But anyway, getting back to the optional parts, there are still more that I need to show! Along with the pass and smartphone, he also comes with…

The silver medal that Yuri received in the Grand Prix Finals! ♪ Not only can Viktor hold it, you can also pose it displayed around Yuri’s neck for a lovely scene!!

To summarize, he comes with a coach pass, smartphone and silver medal!

While Viktor looks amazing all by himself, combining him with the previous released in the YOI Nendoroid series allows for all sorts of lovely situations in Nendoroid size!! (∩・∀・)∩ ▲ Or the church scene (although their clothes are a little different)

Recreate your favorite YURI!!! on ICE scenes right beside you in adorable Nendoroid size!

He’ll be up for preorder today!

You can find more information over on the Good Smile Company website! ♪

Plus, this time around we once again have various bonuses depending on where you preorder! (っ’ω’)っ)) * Please direct any queries regarding this bonus to animate! In addition, this figure is currently in development!!
Nendoroid Yuri Plisetsky! Last but not least, if you missed out on either of these two, they are currently still on sale!
Nendoroid Yuri Katsuki! Both include the GOODSMILE ONLINE Bonuses, but stock is limited! Don’t miss out!! ヽ(*´∀｀)ノ