Phosphophyllite (Land of the Lustrous) 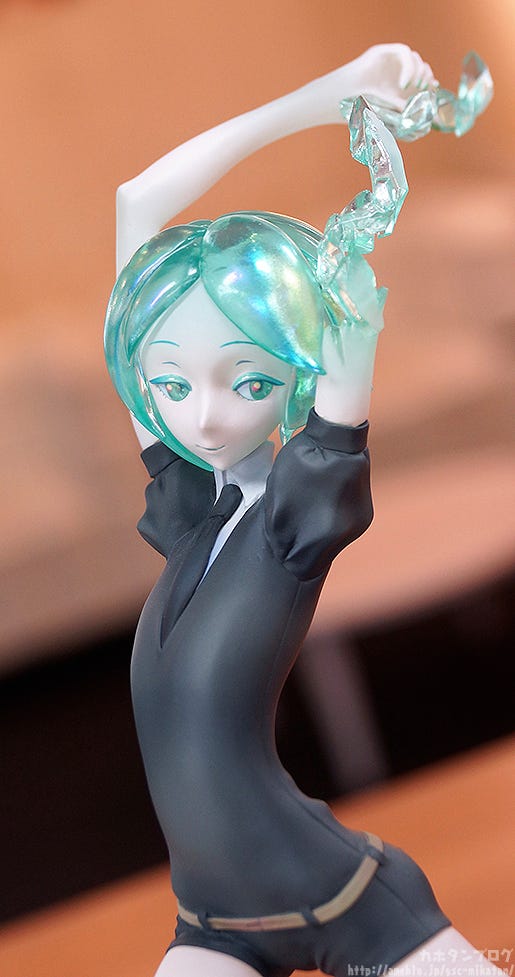 Today I’m going to be taking a look at the 1/8th scale…
Phosphophyllite! From the popular manga series currently being serialized in Monthly Afternoon magazine, “Land of the Lustrous” comes a 1/8th scale figure of the main character, Phosphophyllite! The figure has been sculpted by Shokubutu Shojo-en’s Iwanaga Sakurako, who has created a figure that captures Phos’ beauty in a work of art.

The figure makes use of a large amount of translucency in order to capture Phos’ jewel-like appearance as faithfully as possible, with the hair making use of a metallic paint that captures the dazzling look in careful detail. Be sure to add this beautiful gem to your collection!

From the popular manga series that currently also has an anime airing, “Land of the Lustrous”, comes a 1/8th scale figure of the main character and youngest of the gems at just 300 years old –  Phosphophyllite!

The figure has such a unique appearance that really captures the atmosphere from the series! Let’s start off with a quick spin to take a look from various different angles! (∩・∀・)∩

The sculpting is done by Shokubutu Shojo-en’s Iwanaga Sakurako, and as always the sculpt looks absolutely stunning! The intricate details and subtle touches all over the sculpt make you want to stare at the gem for ages!

The tight fitting black outfit sticks close to the curves allowing you to make out all the little bumps along the hipbone even through the outfit! The contrast of the black outfit and the pale and soft looking skin of the thighs is lovely, and the curves of those thighs are also so beautiful!! ▲The creases in the outfit are also very intricate! (*´ｪ`*)

The gem-like hair is made completely using a translucent green that also makes use of a special glowing metallic paint that creates a kind of oil-like effect that really captures that gem-like appearance of Phos’ design! ヽ(ﾟ∀ﾟヽ 三 ﾉﾟ∀ﾟ)ﾉ The way the hair catches the light differs depending on the angle you choose to look from, so be sure to try all sorts of different angles once it joins your collection!

Plus, if we take a close-up of the face… You’ll notice that the eyelashes are actually sculpted onto the figure! This also makes use of a metallic paint which makes the whole eyes glitter beautifully and differ depending on the angle you choose to look from – just like an actual gemstone! ★

Such beautiful long legs and arms also in fact make use of an ever so slightly translucent appearance to add even more to the gemstone feel! ♪ Now let’s take a look at the base! The main part of the base has a watery-look with ripples all along the water surface!  The ripples are coming from Ventricosus jumping out of the water! ▲ The details of the water are really a treat for the eyes! ▲ If you look close at the base you’ll see some pieces of the arm! (´□｀｡)

Be sure to add this gem to your collection! The gem will be up for preorder tomorrow! Preorders for many products at the GOODSMILE ONLINE SHOP are closing soon! Here are the products closing on the 16th and 23rd of November (JST)!