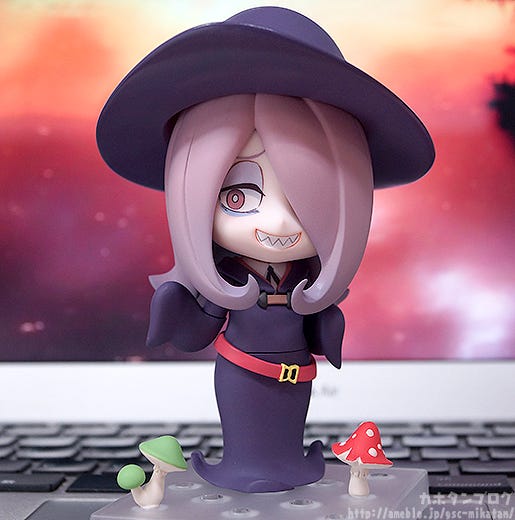 My favorite type of mushroom is the royal trumpet mushroom! I do like most types, although I once at some shimeji mushrooms raw which did put me off them a little bit…

Anyway, today I’m going to be taking a look at…
Nendoroid Sucy Manbavaran! From the anime series “Little Witch Academia” comes a Nendoroid of the unidentified witch and Akko’s roommate, Sucy Manbavaran! She comes with three face plates including her standard languid expression, a scheming expression as well as an entranced expression for when she has a few too many shrooms.

Optional parts include her wand, two mushrooms as well as a flask and sprout parts for her to play some pranks on Akko! In addition, she also comes with the “The Sucy that Wants to Spit on the World” a bonus extra part! Be sure to display her together with the previously released Nendoroid Akko Kagari for all sorts of fun displays!

“I kind of had a hunch before, but Akko’s really is an idiot.”

The sarcastic witch with a rather sharp tongue, Sucy Manbavaran is joining the Nendoroid series! Her cute appearance wearing the Luna Nova Magical Academy has been faithfully captured in Nendoroid size! ☆ The long skirt creating little waves at her feet suit her so perfectly! The long skirt also allows her to stand without the need for a stand!! (・∀・)

Sucy is the second character from Little Witch Academia to join the Nendoroid series, following on from the previously released Nendoroid Akko! ♪ Sucy comes with both a mushroom that can be connect to her stand as well as a mushroom to hold in her hand! (っ’ω’)っ))

In addition to the languid looking standard expression above, she also comes with an entranced expression which works great when she is displayed together with the mushrooms! ☆ ▲She looks so happy in her mushroom world! ♡

Plus she comes with this rather unique part! ヽ(*´∀｀)ノ “The Sucy that Wants to Spit on the World”

Those who have seen the series will remember this Sucy from episode 8 of the series, titled “Akko’s Adventure in Sucyworld”. She also looks just as cute from the back! ▲ The fluffy looking appearance is perfect!

Here she is displayed with Sucy herself! ♥ ▲ You never expected this as an optional part, did you! (/ω＼)

Plus she also still comes with one more rather fun part! Plus just like in the series, you can even have the sprout growing out from Akko’s head in place of her back ponytail! This works great with Akko’s flustered expression and even better with this scheming face plate included with Sucy!!

In summary, here are all the included parts! Mushroom that Fits on Nendoroid Stand

Together with Sucy herself, three face plates and the llama Sucy! ♪ ▲ She will be fun to take pictures with together with real mushrooms! (o´ω｀o)

Be sure to add the mischievous witch to your collection!
Nendoroid Sucy Manbavaran! Be sure to keep your eyes on the Good Smile Company website for more details! In addition, orders from the GOODSMILE ONLINE SHOP will also include a green mushroom part as a bonus!! ♡ ▲ Brings out the Sucy atmosphere even more!

Plus, we also have the next Nendoroid in the works!
Nendoroid Lotte Yanson!★