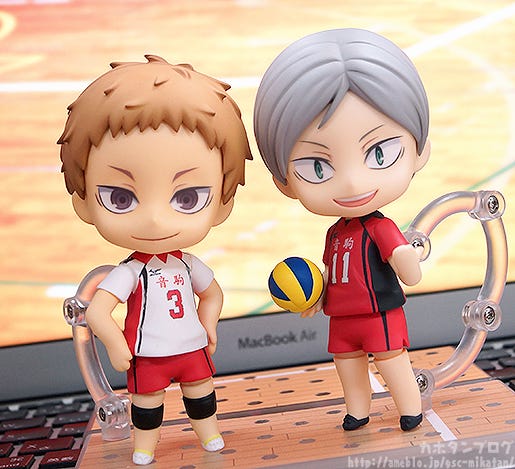 Only three days left until WonFes?! We are busy preparing all sorts of new announcements, so stay tuned!! ☆ These two were both announced for preorder together today!!

Let’s take a closer look at each of them! (=ﾟωﾟ)ﾉ From the popular volleyball manga series with an equally popular anime, ‘Haikyu!!’, comes a Nendoroid of one of Nekoma High School Volleyball Club’s liberos known as the “Defense Commander”, Morisuke Yaku! He comes with three face plates including a reliable standard face, a serious expression as well as a concerned smile based on when he was talking about his juniors with Karasuno High School’s Sugawara.

The Nendoroid allows you to recreate a number of memorable scenes from the series and also comes with a volleyball as well as a special base made in the image of a volleyball court. Be sure to display him in all sorts of poses together with the rest of his team!

“It’s a huge thing to play as a libero for a team know as ‘Defensive Nekoma’.”

The reliable libero for Team Nekoma, with his short eyebrows and short hair! His iconic uniform has also been faithfully converted to Nendoroid size! You can easily pose him defending for the team and showing off his receiving skills! ((´д`●))三((●´д`))

Along with the standard smiling face plate above, he comes with these two alternate options! (｀・ω・´) Using the long stands included with the Nendoroid you can easily create dynamic attack scenes like this! As he is always worried about the rest of the younger members in his team, this allows you to display him looking a little concerned, but still with a smile on his face. (・∀・;)

Orders of  Nendoroid Morisuke Yaku from the GOODSMILE ONLINE SHOP will also include a Nendoroid Plus Rubber Strap: Morisuke Yaku – Nekoma’s Reliable Libero ver. as a bonus! From the popular volleyball manga series with an equally popular anime, ‘Haikyu!!’, comes a Nendoroid of one of Nekoma High School Volleyball Club’s middle blockers and the self-declared ace for the team, Lev Haiba! He comes with three face places including a standard expression filled with confidence, a smiling face as well as the worried expression he had during special training.

Optional parts include a volleyball and a special base made in the image of a volleyball court, as well as an arm part swinging down like a whip allowing for all sorts of poses on the court, and he also comes with his favorite food, inari sushi! All sorts of parts to display the confident Lev by your side in all sorts of different situations!

His neat and tidy silver hair, lovely green eyes and confident look have all been kept in Nendoroid form! Just like Nendoroid Kei Tsukishima he is a little bit taller than other Nendoroids. He also comes with a special translucent part to recreate his “whip-like” spike! ♥ ▲ Too fast to even see the power in his spike!

Along with his standard face, he also comes with these two face plates… A lovely smile perfect for when he has his favorite food, which is also included with the Nendoroid! A plate with three inari sushi as well as some chopsticks! The very top inari sushi can also be removed and placed elsewhere! ♫

It can even be used on the hand that normally holds the volleyball to display him holding it with his hand! ▲ Passing one over to Yaku by hand?!

Lev is known as the self-proclaimed ace of his team, but in actual fact there are quite a lot of basic skills he may be a little lacking on. He includes this rather worried expression for when things don’t quite go as expected! (/ω＼)

Orders of  Nendoroid Morisuke Yaku from the GOODSMILE ONLINE SHOP will also include a Nendoroid Plus Rubber Strap: Lev Haiba – Nekoma’s Ace? Ver.  as a bonus! Both are currently up for preorder!

Plus! If you order them both together… Yaku-san’s Love Whip (A Lower Body Part for Kicking Pose) will also be included as a bonus! Be sure to consider it when preordering! ☆

We now have a total of four characters from Nekoma High School! * Kuroo is making use of some of Kenma‘s arm parts.