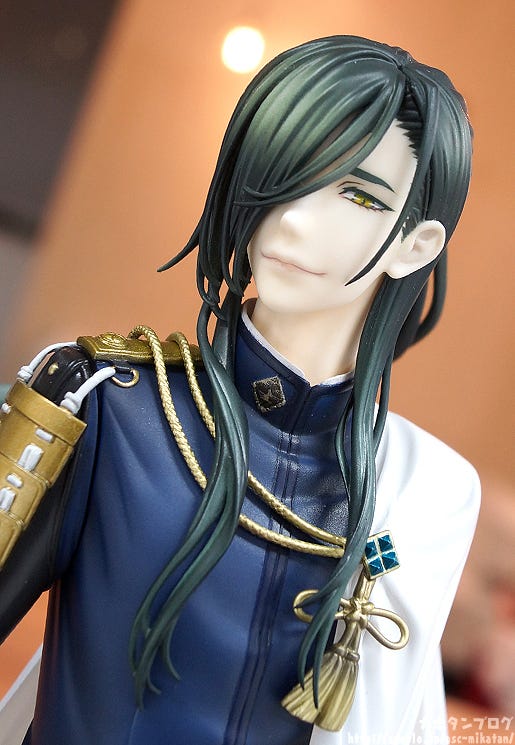 Anyway, today I’m going to be taking a look at…
The 1/8th Scale Nikkari Aoe! From the popular browser and smartphone game “Touken Ranbu -ONLINE-” comes a 1/8th scale figure of Nikkari Aoe based on his standard standing illustration from the game! His charming facial expression, white cloak and long hair blowing in the wind have all been captured in careful detail to capture the mysterious Aoe in figure form. The sculpt has captured Aoe’s character in beautiful detail and he is ready to stand by your side, so be sure to add him to your collection!

The famous sword said to even be able to cut through ghosts, Nikkari Aoe is being transformed into a handsome scale figure!

The large white cloak he has draped over his shoulder makes use of translucent parts to faithfully capture the see-through look from the original illustration! ▲ He looks great from the back too! ♪

Note that the armored parts of his outfit have a shiny glossy finish, while the belt and other areas have a semi-matte finish to give them that leathery appearance! His beautiful long hair has also been carefully preserved, with the unique colors recreated with a gentle gradient effect! ♡ ▲ The ponytail blowing about behind him… so very beautiful!

The soft appearance of the white fabric has also been preserved through the sculpt – the gentle outline and coloring make it appear to have a soft and thin texture! ★ ▲ Long legs with a positioned crease in the center of the pants for style!

The figure was sculpted by Max Factory’s Nanako! The first time I saw the figure I thought it had to be Nanako!

Here are some other Touken figures also sculpted by Nanako… (*´∀｀)ノ They have all been sculpted with such careful attention to the original illustrations! It is always amazing to see Nanako’s work!

Just take a look at this particular part on Aoe! Nikkari Aoe doesn’t show off a lot of bare skin, but this one little gap gives you a little peek! The closed hand holding the fabric and the joints of his fingers to create that motion have all been sculpted with so much detail!!

His refreshing gaze as well as the hair covering up his other eye have also all been included, plus of course that mysterious smile of his! The exquisite look of those lips!! (/ω＼)

The shape of his lips also look great from a higher angle! There are all sorts of angles to be enjoyed! Be sure to find your favorite once he joins your collection!! ヽ(ﾟ∀ﾟヽ 三 ﾉﾟ∀ﾟ)ﾉ

Plus all orders of Nikkari Aoe from the GOODSMILE ONLINE SHOP will include a Nikkari Aoe Sword Charm as a bonus! ★ We also made a TV commercial for Mikazuki! Be sure to take a look! ♪