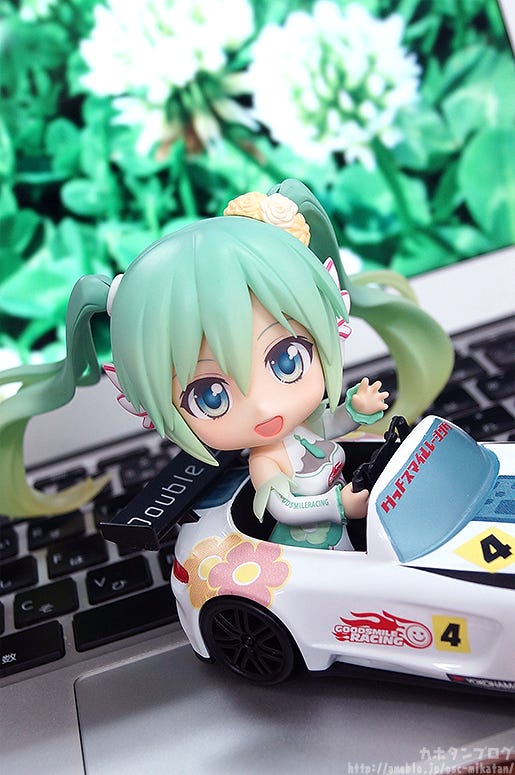 Just as I thought it was warming up we suddenly have a cold spell. I don’t what what to wear in the morning any more!! The official character of the Hatsune Miku GT Project ‘Racing Miku’ is joining the Nendoroids in her 2017 outfit!

The 2017 Racing Miku designed by popular illustrator Tony is based on the image of a fairy, and has been carefully converted into Nendoroid size for fans to enjoy in their collection. She comes complete with a bouquet to support the team, a Nendoroid car for her to ride in as well as a Nendoroid-sized trophy to celebrate the team’s win during the first race at the Okayama International Circuit.

The official character of the 2017 Hatsune Miku GT Project!

The lucky number Nendoroid No. 777 is none other than the 2017 edition of the Hatsune Miku GT Project’s official mascot character: Racing Miku! The adorable fairy-like outfit for the 2017 ver. was designed by none other than the popular illustrator Tony! ヽ(●´Д｀●)ﾉ She is in such a cute pose with one leg up and her hands forming double peace signs! Plus we are also getting a new illustration by Tony in support of each of the races! (灬ºωº灬)

But anyway, let’s get back to the Nendoroid! Here she is from the back! (｡･ω･)ﾉﾞ The somewhat mechanical looking near-futuristic wing design has been adorably shrunk down to Nendoroid size! The twin-tails with a green to yellow gradient also make use of semi-transparent material allowing you to enjoy the way light shines through them! ♪

Her skirt also makes use of the translucent parts making the frills look lovely and light! ♪ Also note that the very transparent area around her stomach is faithfully included and shown by the fact that you can see her belly-button sculpted on the design! ♥

She also comes with a selection of interchangeable hand parts allowing you to enjoy all sorts of original poses as well! (σ・∀・)σ ▲ Just by changing the hand and arms makes for a rather different feel!

Now for a first look at the other optional parts! This face plate has a much more gentle feel compared to the standard face plate, creating a more mature appearance that matches the bouquet very nicely! ♡ ▲ She has a much more refined appearance like this!

If you look close at the bouquet you can see the various different flowers are each sculpted one-by-one to form the bunch! ♪ The bouquet is given to the winner together with the winner’s trophy, so it is included with the Nendoroid in hopes that it will help spur on the team to continue winning more races in the future! She also comes with a ridable Nendoroid Car! ▲ Her twin-tails trailing behind her to show of the speed of the car! ☆

Note that the flower design on the back of the car, as well as the numbering are all from the actual car taking place in the Super GT races! In addition to the items above, the Nendoroid will also comes with a tiny replica of the trophy won when the team took first place at the Okayama International circuit earlier this year! ε=(｡・д・｡) ▲ The next race will take place on the weekend of the 20th May at Autopolis!

Add the fairy of the racing circuit to your collection!
Nendoroid Racing Miku 2017 Ver.! Note that this item is only available to personal sponsors of the GOODSMILE RACING & TeamUKYO racing team!

The team relies on sponsors to continue racing! The sponsorship courses come in various different levels and types, from simple sponsorship to Nendoroid and figma courses! You can dins our more about the courses as well as apply for them over on the personal sponsorship application site here: http://gsr-global.ecq.sc/

Note that select international partner shops will also allow you to apply to be a personal sponsor in store. Contact your local partner shop for more information!