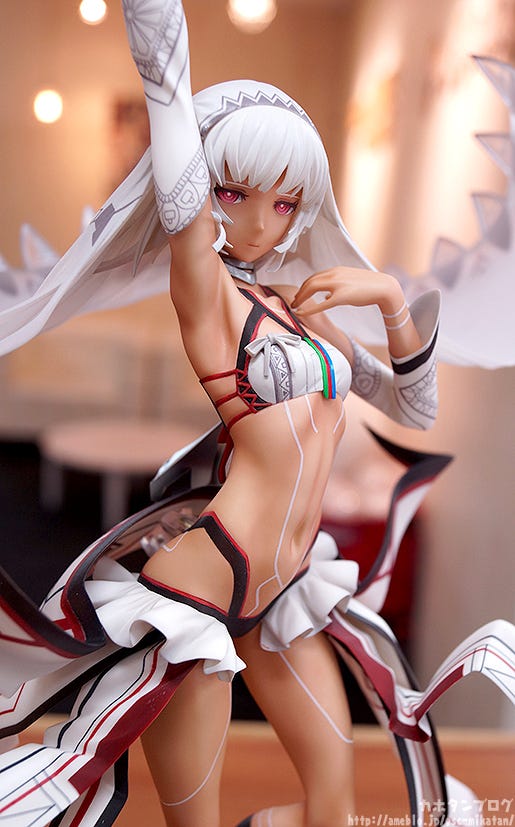 Today I’m going to be taking a look at the 1/8th scale…
Saber/Attila!

From the popular smartphone game ‘Fate/Grand Order’ comes a 1/8th scale figure of the Servant-class servant who wields Photon Ray, the War God’s Sword – Attila! The figure is based on an original illustration by huke!

The figure captures the mysterious air of Attila’s character through her expression, with her powerful yet supple brown-skinned arms and legs all sculpted in careful detail with close supervision by huke to create a work of art that fans will be proud to own.

Her iconic long, white veil and the unique colors and transparency of Photon Ray’s blade make use of translucent parts to create a faithful rendition of the original illustration in figure form. Be sure to add the proud yet wistful Attila to your collection!

“I will not destroy life. I will demolish civilization.”

From “Fate/Grand Order” comes a stunning scale figure of the proud and rational warrior with a mysterious emptiness to her – the Saber-class servant Attila!

At first glance it way seem like a rather simple standing pose, but the dynamic sculpt of the veil and outfit around her hips give the figure some really impressive details and volume!! ヽ(*´Д｀*)ﾉ The movement of the outfit is most likely the first thing that captures your eye, but when you look closer you can really see the hard work put into the details and intricacy of the sculpt! ▲ These frills are so thin!

But the outfit is just one of many highlights! As the figure actually shows more skin than it hides, you can also get a nice look at her body’s curves and dark skin. A truly magnificent body with sculptwork that captures the soft look around her hips and stomach. The pose also causes her rib cage to become quite a prominent feature that leads up to her chest creating a lovely little gap between her body and her outfit. The collarbone and the curves from her armpits to her chest are also such a wonderful sight! Looking at this figure I can’t help but think it’s more of a work of art than a figure from a game… but at the same time it caters to various different fetishes at the same time!

Attila herself stands about 270mm in height, but with the sword included the figure stands 445mm in height! You can’t really tell when looking from the back, but from the side you get a good feel for the sheer size of the long veil extending behind her! (∩・∀・)∩

Let’s take a step back quickly and first take a look at the original illustration by huke that the figure was based on! ▲ The first time this image has been shown! ♪

The illustration is filled with a powerful, imposing appearance and yet also somehow captures a more hidden, delicate side to her at the same time!

The figure has been very carefully tuned to be as faithful to the original illustration as possible, keeping the unique charm and style of huke’s design while converting it into a three dimensional version for fans to enjoy from any angle they please! ▲ Look into those eyes! Don’t they just draw you in?

Another highlight of the figure that helped to capture the appearance from the illustration is the use of translucent parts for the edge of the patterned veil, as well as on Photon Ray, the War God’s Sword. (｡･ω･)ﾉﾞ The translucent parts look slightly different depending on how the light hits them, adding to the mystique of the character!

The head sculptor for the figure was Manabu Katou from GSC’s production team, and when I asked him what his personal favorite point on the figure was he told me it was her back! (I could have sworn Manabu had a leg fetish, but maybe I’m thinking of someone else.) From most angles her back is normally covered up with the veil which makes it quite difficult to see, but when you do get a good look at it from the side or from a lower angle you can enjoy the various up-and-downs of her spine and the upright pose!

Also note the neat white stripes all over her body including the back! That bumpy feeling of the knee has been captured by both the sculpt and the paintwork so beautifully. While the legs are thin they also have a bit of a meaty feel to them that make it look like they would be soft to the touch.

The planning team’s Chan Shuu-senpai who was in charge of this figure says his favorite point is the way the hair extends out from the veil! (´□｀｡) ▲ Note the mark on her forehead hidden behind the hair!
The wonders of being able to see from any angle you choose!

Along with that he also spoke about his love for the stomach area as well as the contrast between the white outfit and the darker skin! Definitely two points worth noting! (/ω＼) This is one of those figures that I really want everyone add to their collections and enjoy for themselves! There is just so much to see and appreciate!!

Be sure to add the proud warrior to your collection!!
1/8th Scale Saber/Attila!

Be sure to keep your eyes on the Good Smile Company Official Site for more details! Also don’t forget that there are a couple of other Fate/Grand Order items currently up for preorder! ★ *This product only includes a Nendoroid Face Plate and Front Hair Parts.ど