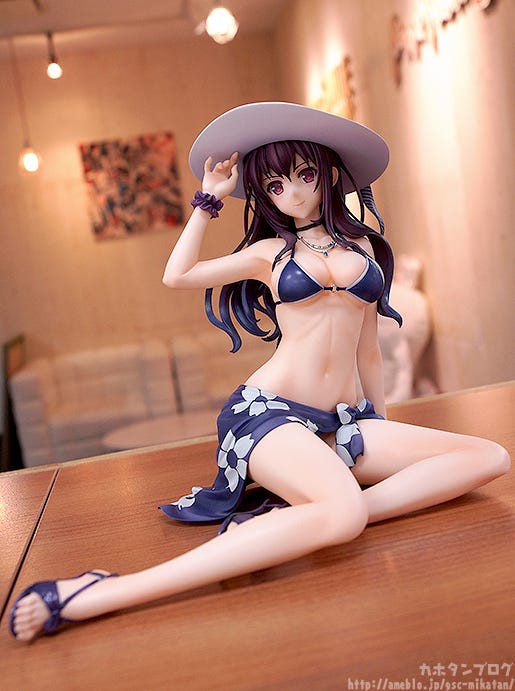 I don’t think I have worn a swimsuit nor gone swimming for over five years now. That said, I can barely swim anyway… if I ever do go swimming I will be sure to bring a swimming ring with me! From the popular anime series Saekano: How to Raise a Boring Girlfriend ♭ comes a 1/7th scale figure of the popular novelist Utaha Kasumigaoka wearing a swimsuit! The figure is the start of a second series of figures based on the original illustrations by Kurehito Misaki, featuring the Saekano girls wearing their lovely swimsuits.

Misaki’s delicate touch and unique coloring have been carefully preserved on the figure, while also capturing the sensual and soft appearance of Utaha-senpai’s body with intricate sculptwork and paintwork. The hat and pareo of the figure can both be removed allowing for a slightly customizable display!

The first in a series of Saekano swimsuit figures based on original illustrations by Kurehito Misaki!

From Saekano: How to Raise a Boring Girlfriend ♭ comes a sexy figure of Utaha Kasumigaoka based on original illustrations by the original character designer for the series, Kurehito Misaki! The subtle changes in color and soft looking curves of her body have all been captured on the figure perfectly! I think the area that really does it for me is her stomach! Those intricate ups-and-downs give her skin such a soft looking appearance! The sitting pose gives the figure a different feel to standing poses… it’s a little hard to put into words but I get the feeling you can see more ‘gaps’ thanks to the seated pose!

The pareo also really looks like it is made from fabric, while the twists and twirls of the ribbon on her hat are also lovely! By the way, many of you may remember that we already did a similar series based on artwork by Kurehito Misaki, where all the characters were placed in poses in the middle of getting dressed! This is a very similar series but will instead focus on all the heroines wearing their swimsuits!! You can find the previous series here! (∩・∀・)∩

The next in the series have already been announced and are well on the way! * As displayed at Winter Wonder Festival 2017 But let’s get back to our main feature for today – Utaha-senpai!! ♥ Such an impressive body for a high school student!

Even though she is in a rather revealing pose there is something about the wide-brimmed hat, the way her hand is posed gently pushing it up and the gentle smile that make her look so very elegant!! (‘-‘*)(,_,*)(‘-‘*)(,_,*)

Plus, although it may not be the first place your eyes look, the details on her feet are just as stunning as the rest of her body! The metallic fastener on her shoe strap and intricate little toes with each of her nails carefully sculpted and painted show the amount of detail that went into the figure!

Many people think that swimsuit figures are mainly to see the chests and bottoms of characters… but there is always much more than that, and we strive to capture the details of every single part of the body as faithfully as possible for fans to enjoy!! (/ω＼)

Now for some customization options! ▲ With the hat removed see she still has her standard white headband! ε- (´ー`*) For those who want a better look at Utaha-senpai’s lovely hips underneath the pareo!

The swimsuit design underneath the pareo is also so rather cute!! （。´-`）.｡oO（Be sure to take a nice close look from all sorts of angles once she joins your collection!）

（Also be sure to run your finger along her hips and stomach and feel those lovely bumps!!）Oo｡.（´-`。）

You can combine the parts however you see fit! Here she is with the hat but no pareo! ♥ Plus this product will also include a postcard featuring the original illustration by Kurehito Misaki that the figure is based on! ▲ This will be included in the package with your figure!

Add Utaha-senpai in her sexy swimsuit to your collection! Available for preorder from tomorrow!

Also don’t forget to watch the second season which starts to air from the 14th April 2017!