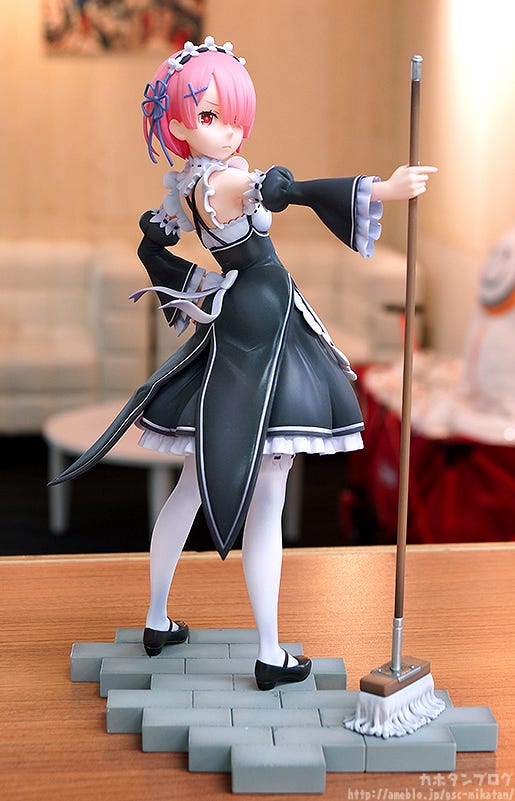 I don’t have any specific recipe that I’m good at… I often take a look at recipes online and can generally follow them without trouble, but I’ve never had a recipe that I thought I could make exceptionally well…

Anyway, today I’m going to be taking a look at the… From the popular anime series ‘Re:ZERO -Starting Life in Another World-‘ comes a 1/7th scale figure of the older of the twin maids that serve at the Roswaal mansion – Ram! The figure is based on the 2nd volume of the Blu-ray/DVD jacket cover for the series and features Ram wearing her characteristic maid outfit while holding a deck brush out in her right hand.

Ram is in a more resolute pose when compared to Rem, but her soft-looking lady-like figure has also been faithfully preserved on the figure for fans to enjoy! The base of the figure is specially designed to link together with that of the previously announced 1/7th scale figure of Rem to display the twin sisters together! Be sure to display Ram together with her beloved Rem!

“I am Rem’s older sister. That is one thing that can never be taken from me.”

From Re:ZERO -Starting Life in Another World- comes a 1/7th scale figure of the older of the twin maids: Ram!

She has been posed in an imposing pose holding a deck brush out with her one hand! The confidence in her pose is almost enough to make you think that she is better at cooking, laundry, cleaning and sewing… when the truth of the matter is that title goes to her younger sister Rem! The unique tailcoat-style design of her maid outfit has been sculpted beautifully, with the frills around her neck, sleeves and the skirt area all individually sculpted for amazing detail! (*´ｪ`*) ▲ The creases on her skirt are also lovely!

But it’s not just the maid outfit that looks amazing… From the front her modest bosom looks so very soft! Plus those armpits! The tight-fitting socks cover up most of the skin on her legs, but you can still easily make out the shapes of the area behind her knees thanks to the amazing sculptwork! You need to slide your finger along the legs to really appreciate the various little ups and downs that have been captured so perfectly! ヽ(●´Д｀●)ﾉ

Let’s move on to her facial expression… Those downward facing eyebrows and sullen expression… the pose captures Ram’s huffy personality at the start of the series!

I can just imagine her lashing out with some rather harsh words when looking at this expression! As you can see from the photo above, the eye underneath her hair has of course been painted in just as much detail as all the fully visible areas!

Another really well sculpted part is the soft-looking bristles of the deck brush! ▲ It really looks like it has some water absorbed in the bristles!

A figure based on the 2nd volume of the Blu-ray/DVD jacket: Be sure to check the Good Smile Company website tomorrow for more information! (｡･ω･)ﾉﾞ

As a side note, this figure is of course designed to be displayed with the previously announced 1/7th Scale Rem! ♪ We also have a selection of Re:ZERO Nendoroids currently up for preorder! ♥