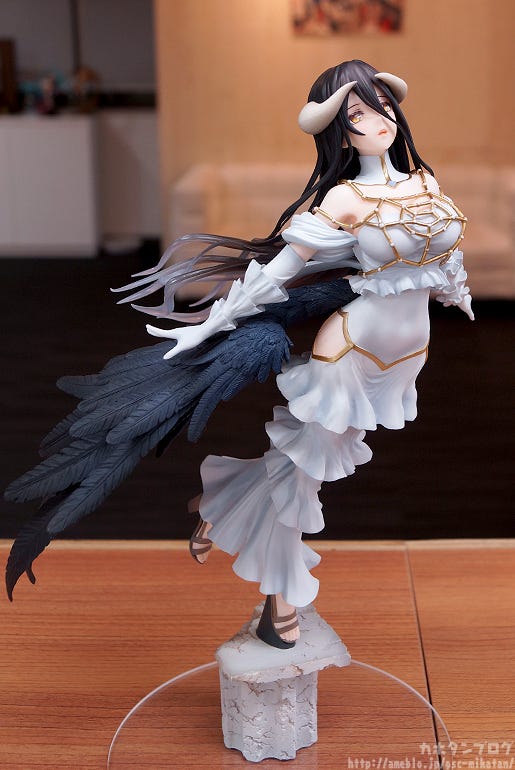 From the popular dark fantasy series ‘OVERLORD’ comes a 1/8th scale figure of the Great Tomb of Nazarick’s Floor Guardians Overseer and top ranking NPC in Nazarick – Albedo! The figure is based on an illustration by character designer so-bin that was seen in the ending theme of the anime series.

The figure captures Albedo’s peerless beauty in a dainty yet wistful pose. Her black wings are amazingly intricate with each and every feather sculpted separately for impressive detail. Be sure to add the “Pure-White Devil” to your collection and enjoy her beauty by your side whenever you wish!

“I swear I shall bring this world to you.”

From the 25th February 2017, the movie edition of the series has been showing in Japan making OVERLORD even more well known than ever before, and from that series comes a stunning figure of the beauty with no equal – Albedo!

Her painted prototype was revealed at Wonder Festival on the 19th of February, and now she is already up for preorder! Just look at those extravagant wings spreading out behind her! The figure is based on an illustration of Albedo by character designer so-bin, and while it captures the wistful, fleeting feeling from the original illustration it is also simply such an amazing figure to look at!

As you may have noticed, the tips at the end of her hair slowly lead to a transparent gradient which bring out that transient feeling even more! The paint is one thing, but the sculpt is also stunning! The way the light shines off it making it look so silky and shiny is just perfect! ♡

This is actually the 3rd figure GSC has released from OVERLORD! But let’s get back to Albedo!★ The two points I really want to focus on are her wings and the faithful representation of her body! (∩・∀・)∩ These beautiful black wings sprouting from her hips… each and every one of the feathers has been carefully sculpted separately for a stunning appearance! ヽ(ﾟ∀ﾟヽ 三 ﾉﾟ∀ﾟ)ﾉ

You can see certain feathers have been sculpted differently from the others and even though they are made from a hard plastic they look like would really feel all soft and feathery! Also note the detail on the inner side! ★ Just look at that mouth! I don’t think I need to say anymore!!

The lovely shape of the tiny teeth, the soft, moist looking tongue and those glossy lips… the mouth alone brings out such a sensual atmosphere to the figure!ヽ(*´Д｀*)ﾉ

In addition to the mouth we have that sexy curves that forms between her armpits and bosom! Plus the texture on those horns look so incredible… the face is just packed with details.

Another section that really stands out in my eyes… Look at the gentle changes in color and unevenness around her belly button! The sculpt and paintwork really gives you a feel for the tightness and of her outfit as well as how thin the material is!

The frilly skirt also has the creases around the bottom very intricately sculpted onto the design, and even the inside areas that you can’t normally see from the front are beautifully sculpted! ♥ ▲ The reverse side is just as lovely!

While the figure is quite a simple standing pose, the elaborate sculpting really makes her stand out in a very special way! There is just so much to enjoy!! Be sure to add the unrivaled beauty to your collection!

Purchases of Albedo from the GOODSMILE ONLINE SHOP will include a B3 Clear Poster as a bonus! ♪ Be sure to consider it when preordering! (●‘∀‘●)ﾉ”

There are a huge number of products with preorders closing on the 2nd March at 12:00JST!! All the below and more!! There are a load of items with GOODSMILE ONLINE SHOP bonuses as well, so make sure you don’t miss out on your chance to grab them!

Bonus: Special Round Base The coin is sculpted on both sides, is made from metal and measures about 30mm in diameter!