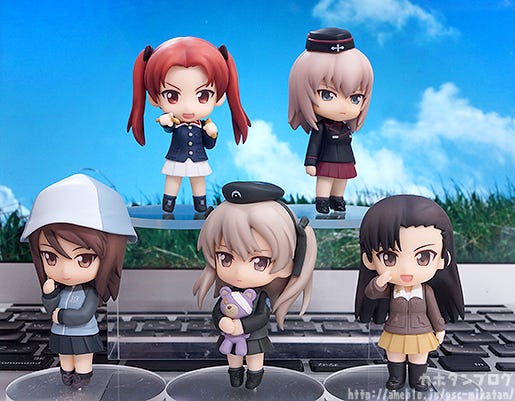 The ‘Way of the Tank’ from the GIRLS und PANZER film in Nendoroid Petite size!

These lovely little Nendoroid Petites just recently made their debut at Wonder Festival, but they are already ready for preorders!! For those who are unaware, Nendoroid Petites are smaller Nendoroids that stand approximately 65mm in height! ヽ(ﾟ∀ﾟヽ 三 ﾉﾟ∀ﾟ)ﾉ ▲This is how they compare with a palm! So cute! ♡ Alice is posed hugging her purple Boko teddy bear! The genius jumped her way into college, but there are definitely some cute aspects that show off her true age! (*´ｪ`*) ▲ The pose with her hand pointing ahead captures her resolute character! ▲ I can just imagine her refreshing voice! Mika comes with her floppy hat! It can also be removed allowing for some different poses! Nendoroid Petites have a ball joint in the neck and the arms are attached with simple joints allowing for simple movements that allow for little changes in nuance to better match your display! They are not quite as posable as normal Nendoroids, but they can be moved around more than you’d expect! ♪

This is how they compare in size with a box of mints! ヽ(*´Д｀*)ﾉ While they may be small, careful attention is given to bring out their characters as much as possible!

Plus, there is also one more secret character that will be included in this set! You’ll have to wait and see who that will be though!

Be sure to add the cute Girls und Panzer characters to your collection! But we also have a couple more related products coming up for preorder tomorrow! ★ This time around the tank treads can also be removed allowing for more posing options from the series! The hatches on both of these tanks can of course be opened up to have the Nendoroid Petite characters riding inside! ♥

But that’s still not all!! Those who missed out on the original Nendoroid Petite Girls und Panzer series are in luck! We have changed the format a bit, but we are rereleasing the original series in two separate sets! More details about each of these products will be available on the GOOD SMILE COMPANY Official Site at 12:00JST tomorrow! Be sure to take a look!! (*´∀｀)

The WonHobby 25 items are currently up for preorder! Orders close on the 28th February at 12:00JST!! This is your last chance to preorder them!!