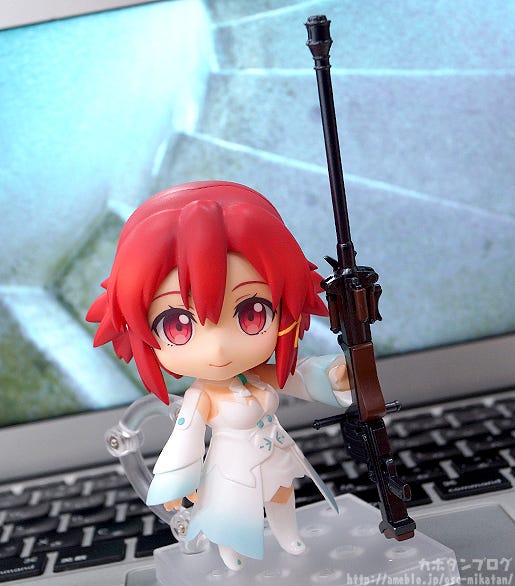 It’s Christmas this weekend!! I will do my very best in finding the most delicious cake and enjoying it to the best of my ability! *nom* (๑´ㅂ`๑) *nom* From the popular anime series ‘Izetta: The Last Witch’ comes a Nendoroid of the main character Izetta wearing her ‘White Witch’ outfit! She also comes with the Izetta Custom Anti-Tank Rifle, easily one of the largest and most powerful weapons in Nendoroid history! She can be posed both holding and aiming the weapon and can even be displayed flying on top of it!

In addition, the Nendoroid also includes four swords and four lances to create all sorts of combat scenes from the series! She comes with the a gentle smiling expression and a confident shouting expression for combat scenes – simply select the face plate that better suits the situation!

“The White Witch of Eylstadt”

A Nendoroid of the witch who swears to defend the the country of Eylstadt as well as its Princess! Izetta is joining the Nendoroids wearing her ‘White Witch’ outfit!! The Nendoroid also comes equipped with one of the largest weapons to ever be included with a Nendoroid – the Izetta Custom Anti-Tank Rifle!

Izetta herself has also been beautifully sculpted with her hair that fans outward from the back faithfully shrunk down, and the unique appearance of her White Witch outfit converted into Nendoroid size!! ♪ If you look from the front you’ll also notice that Izetta’s lovely curves and body have also been faithfully preserved even in Nendoroid size! ♥ ▲ The layering and creases on her clothes look lovely!

Her first expression is this gentle smile… But she also comes with a valiant expression for combat scenes!★ “I will fight for the Princess. As the last witch…”

Those sharp eyes glaring at her opponent with an open mouth as if shouting out in the heat of battle! Her determination really comes through!!

As you can see, the figure also allows you to display Izetta riding on top of the Izetta Custom Anti-Tank Rifle! ▲ One part of the skirt is replaceable to allow for this pose!

Even through it is all shrunk into Nendoroid size the parts for her feet to rest on and hands to hold are nicely lined up! ▲ This part is still in development and might change a bit before release!

Plus, as you can see a set of both the swords and lances from the series are included!! They comes with their own little stands and bases allowing you to display them as if they are floating in the air like as in the series! ♪

Of course you can also have Izetta hold the Custom Anti-Tank Rifle as if aiming it at her opponent! Simply select the pose that you think suits her best! ▲ A special arm part to support the gunstock with her shoulder is included! ☆

Be sure to add the White Witch to your collection!

Be sure to take a look at the Good Smile Company website tomorrow for more details! ♪