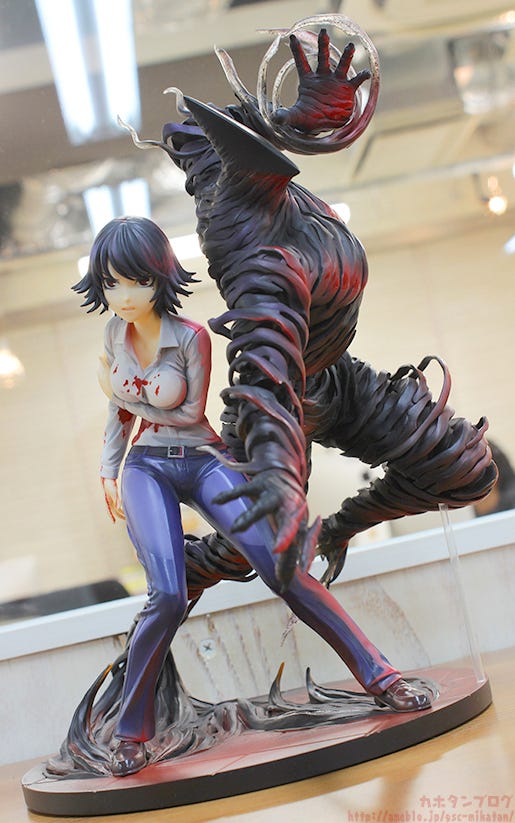 Hi everyone! Suwabe (@gsc_suwabe) from the Corporate Planning Division here! Today I’m going to be taking a look at one of the two Ajin: Demi Human items that went up for preorder today!

“How long has it been since I last let Kuro-chan out?” The first thing that really stands out about this figure is the way it has been painted to capture the effect of the 3D motion animation that it is based on! At first sight you may not even know where to look, but I’ve summarized some of the most interesting areas so we can all calm down and take a nice close look!!

・The highlights of the hair change from left and right (Izumi)
・The shadow on her shirt has been clearly changed to a grey. (Izumi)
・Her slacks clearly show both movement and the reflection of light (Izumi)
・The red shadow painted along the left side of the bodies (Izumi & IBM)
・The glossy effect added to the above mentioned shadow (IBM)
・The translucent parts of the IBM that seem ready to disappear (IBM)
・The light purple pearl paint used over the body (IBM)

That covers some of the main points, but now let’s take a look at some close-ups to get a better look at the detail!!

▼ Izumi looks at her opponent with a pained look on her face as she clenches her teeth! I can’t be the only one that think this makes her really badass!!! ▼ If you look down at her feet it really seems like Kuro-chan has just ‘come out’! ▲ The shiny look of the leather shoes also looks great! The way the blood is painted on makes me start to feel a little feint just looking at her! Her side in particular has been completely soaked through with blood making it look so painful – but the fact that it almost hurts to look at it is what makes it such an incredible figure!!

As I have mentioned many times before, figures are objects that can make you feel profound sympathy simply by looking at them! Is it exaggerating to say that they have even surpassed being ‘works of art’ and become something even more? No. I think not. (The End) Both Izumi and the IBM look amazing from the front, but their full charm only comes out one you take a look from all sorts of different angles!

The figure is so filled with things to see that I honestly cannot possibly capture them all in my photos! I’m a failure as a blogger!! We have yet another ‘Endless Figure’ on our hands!! (A term I coined for figures that you can look at forever by simply changing where you are looking from over and over again)

The IBM has a pearly purple paint that is more visible on the side facing Izumi! Just look at the amazing sculpting and paintwork of that arm!! This figure is not only going to give me trouble as a blogger, but is going to give the production team even more trouble!!

▼ I also have to point out that Kuro-chan has a rather cute bottom! You may think for a second that I meant to say Izumi has a cute bottom – which she does – but just look at Kuro-chan’s! It’s rather cute too!

▼ From the back you can really feel the bond between the two of them! That may have something to do with the fact that they are literally connected, but the point is that Kuro-chan’s dynamic movement in the pose and sculpt really makes it seem like he is jumping in to protect Izumi which really brings out the atmosphere and story for the figure!!

But that’s all I have time for today!!
Izumi Shimomura & Invisible Black Matter Set Also available for preorder today is…

Next time I’ll be taking a closer look at Ajin: TAKAYUKI TAKEYA Ver.!