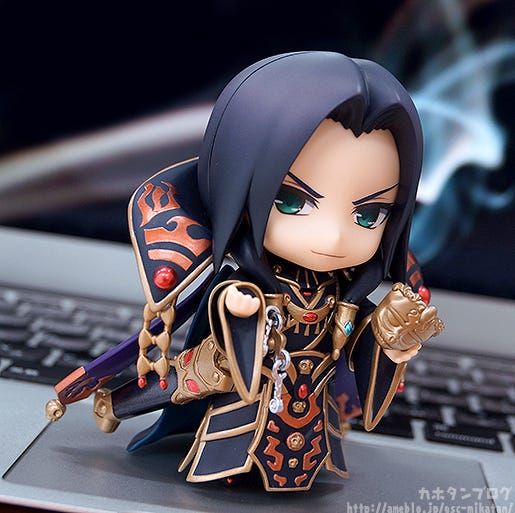 Today I’m going to be taking a look at….
Nendoroid Betsu Ten Gai! From the fantasy glove puppetry series with a sequel in the works ‘Thunderbolt Fantasy Sword Seekers’ comes a Nendoroid of Betsu Ten Gai, the unrivalled swordsman and head of the Genkishu with the ability to control the spirits of the dead! He comes with three face plates including his standard expression with a cunning smile, a chibi expression based the character drawn by Yuupon as well as an expression based on the actual glove puppet used in the series!
He comes with a small version of the mask he wore when he first appeared in the series as well as a Nendoroid-sized sword! Last but not least, one of the mysterious Miyoku creatures he used for movement and more is also included! Be sure to display him with the previously announced Nendoroid Lin Setsu A and recreate the Thunderbolt Fantasy Sword Seekers atmosphere in your collection!

“In this world the sword is proof of power.
That is a truth that cannot be refuted.”


The character known as the ‘Bones of Creation’ who is the head Genkishu and is out to steal the powerful sword from the Tan family – Betsu Ten Gai is joining the Nendoroid series!

Ever since he first appeared in the series I’ve always been amazed at his fantastic outfit… and it has been so beautifully converted into Nendoroid size!! Together with that haughty smile and the mask he holds in his hand it really looks like one of the scenes from the series has been completely transformed from puppet into Nendoroid! I can just imagine his lines playing through my head! ★

“I shall take it while you live, or pull it from your dead body. It makes no difference to me.“

Both his hair and his outfit have a mostly black base, but the various decorations and colors that make up the design have all been faithfully included on his Nendoroid design making for a very extravagant looking Nendoroid! (*´ｪ`*) ▲ The little skull accessories have been been sculpted on!

From the back you can see the back of his collar is gold! I really wanted to keep the the unique feeling of his cape as well as keep him easy to play with even with those who aren’t familiar with Nendoroids, and thus he can stand up without the need of a Nendoroid stand! You can easily balance him on his cape! It was all thanks to the long outfit that this was possible, but I think it worked out really well! (灬ºωº灬)

His sword ‘Tokusei‘ is also of course included in cute Nendoroid size! On the final product the hanging accessory will be completely attached!

I don’t know if that made any sense… how do I explain this… the end part that is currently more of a ‘C’ will become an ‘O’!

Anyway, moving on to his other expressions, first off we have a special face plate based on the chibi expression based the character drawn by Yuupon – similar to the one included with Nendoroid Lin Setsu A! (｡･ω･)ﾉﾞ Plus a new part that was announced today – a Miyoku!!

In the series these bird-like creatures were used for transport, but in Nendoroid form they work best as a cute little partner! The unique skeletal appearance of the design has been faithfully preserved! Not to mention those glowing red eyes!! ★ ▲ The design worked quite well in Nendoroid mode! ♪

The sword can also be removed from its scabbard like so! ▲ The sword can be inserted and removed just as is! ♪ Thick eyebrows, clear eyes and puffed-up lips… a special face plate based on the expression on the original doll!!

You can also pose him pointing forward like below, recreating the banquet scene in the Seven Sins Tower with Lin Setsu A! ▲I love the contrast of their outfits! He’ll be up for preorder from the 25th November!!

Keep your eyes on the  Good Smile Company Website for more details!