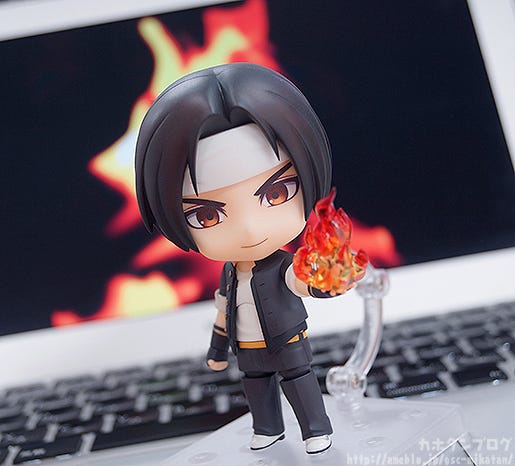 I think it’s almost time to graduate from short-sleeves this year!! It’s starting to get a little chilly!! Anyway, today I’m going to be taking a look at a Nendoroid that can definitely warm things up a bit… From the popular game ‘THE KING OF FIGHTERS XIV’ comes a Nendoroid of the heir of the Kusanagi clan who can freely control fire – Kyo Kusanagi! The Nendoroid is wearing his classic school uniform, and comes with both a standard face overflowing with confidence as well as a combat expression that matches with his signature saying perfectly!

He can easily be posed using a variety of his moves, and comes with special flame effect parts to recreate his ‘100 Shiki: Oniyaki’ and ‘Ura 108 Shiki: Orochinagi’ moves. Enjoy his impressive special moves in Nendoroid size!

From the popular fighting game series loved for years around the world – THE KING OF FIGHTERS (KOF) – comes a cute Nendoroid of Kyo Kusanagi! The rolled-up sleeves, white headband and that completely fearless smile on his face… the classic Kyo Kusanagi has been captured so perfectly!!  (∩・∀・)∩

The layers of his uniform and the little details on the buttons or creases on the sleeves have been preserved beautifully! ▲ Also note the patterns on his gloves!

Kyo Kusanagi is of course the heir of the Kusanagi clan who can freely control fire – and that is shown by the bright red burning fire effect parts he holds in his left hand!! The Nendoroid comes with two expressions, the first of which is the confident expression you see above, with the second being this shouting expression perfect for combat scenes! (´□｀｡) He also comes with a variety of interchangeable  arm parts such as this bent arm which allow for all sorts of original combat poses and much more! ♡

Plus he also comes with even more impressive fire effect parts… Allowing you to recreate his Ura 108 Shiki: Orochinagi move in all its glory!! But that’s not all as if you combine his bent leg with the knee up and pose him carefully with these other effect parts you can also recreate the 100 Shiki: Oniyaki move as well!!! ヽ(ﾟ∀ﾟヽ 三 ﾉﾟ∀ﾟ)ﾉ ▲ He’s so small and yet has such a powerful combat scenes!!

In other words, the Nendoroid comes with three different flame effect parts!! ▲ All together they have quite an impressive volume!

I’m sure fans will be able to recreate all sorts of epic scenes from the game and much more!!(●‘∀‘●)ﾉ”

Be sure to add the manly, powerful fighter to your Nendoroid collection! Also don’t forget that there are more KING OF FIGHTERS Nendoroids on the way!! Look forward to her!! ♪

*The actual flame parts on the final product may differ slightly.