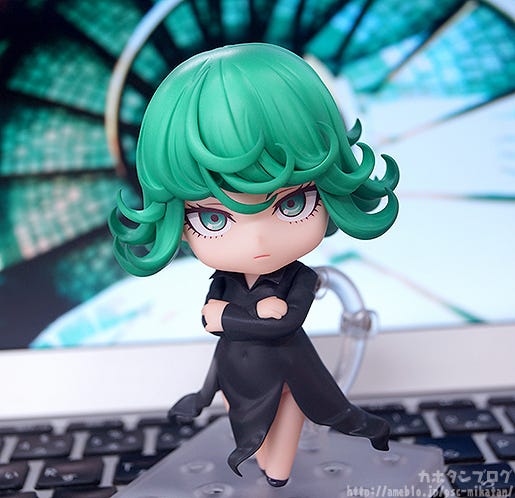 Today I’m going to be taking a look at…
Nendoroid Tatsumaki! The ‘Tornado of Terror’ that defeats monsters with her supernatural powers!

A youthful appearance, selfish personality and S-Class Rank 2 Esper abilities – the ‘Tornado of Terror’ Tatsumaki is joining the Nendoroids! Her characteristic naturally curly green hair, black dress that shows off her legs rather boldly and those sharp eyes that give her a confident air have all been transformed into Nendoroid size so perfectly!

The curly hair has of course been faithfully included all the way around the back as well! Let’s take a closer look!! Looking from this angle though the first thing I notice isn’t her hair, but instead the way her dress fits so closely to her body!! Even as a Nendoroid you can make out her curves from under the dress!! The very first photo also showed this off nicely as you can even see her belly button thanks to the tight dress!!

You really need to experience the lovely sculpting with your own two eyes… and hands!!

Her outfit shows off her legs very nicely and she also comes with bent leg parts which along with the Nendoroid stand allow you to pose her flying through the air! ♪ Hmm…? But how many of you have noticed that something else has also changed with this pose?! Two different front hair parts are included – the left one is to display her making use of her supernatural powers while the one on the right is her standard hair!! You simply need to swap out the parts for the more ruffled appearance of her hair when she uses her powers!! The sides and back of her hair also come with a set of interchangeable parts to match the ruffled up look from the front to complete the alternate look! ★ Simply switch out the parts that match your pose best!! For example, here we have Tatsumaki in full battle mode with all the ruffled hair parts attached together with her combat expression!! The Nendoroid also comes with a selection of debris parts each with their own little stands which you can pose together with Tatsumaki to pose her using her telekinesis! ▲ Even the back side of the debris is lovely and detailed! (・∀・)

She also looks great posed as if throwing out just one of the pieces of debris – a quick battle scene that would look great posed with other Nendoroids! ♪ Simply pose the Tornado of Terror however you think she looks best! ♥

Plus you can also pose her with the previously released Nendoroids from the series to bring out the One-Punch Man atmosphere even more!  (●´Д｀●)ﾉ ▲ Recreate that scene together with Nendoroid Saitama!

Plus, Nendoroid Genos: Super Movable Edition is scheduled to be released in December 2016! Be sure to add the adorable S-class superhero to your collection! ♥