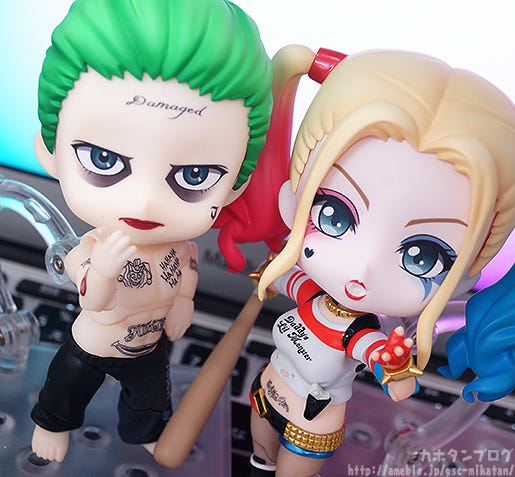 Today I’m going to take a look at… From the movie ‘Suicide Squad’ comes a Nendoroid of one of the most popular DC Comics villains – the Joker! The maniacal expressions of the Joker have been faithfully recreated in Nendoroid style, but have a very unique feel to them that shows an all-new potential for the Nendoroid series! He comes with three face plates including a smiling expression, a shouting expression and a glaring expression. Optional parts include a razor and electroshock tools.

A selection of the various tattoos on his body and face have also been included on the design to bring out as much of the Joker as possible in Nendoroid size! The figure is also fully articulated and features slightly longer hands and feet compared to standard Nendoroids, keeping the ‘chibi’ size while also preserving the bizarre side of the Joker for fans to enjoy in their collection!

His pale, thin body, black eye-shadow, bright green hair and strangely red lips… the Suicide Squad version of the Joker has been transformed into Nendoroid size! Even the various tattoos all over his body and face have been included on the design, so be sure to take a nice close look at all of them once he joins your collection! While the design of his body is very slim, you can still see he also has a bit of a muscular build with his chest and abs… even on the Nendoroid design! The stomach area also has a special movable part that easily allows you to bend the body in various different ways for some great poses!

He also comes with alternate face plates, the first of which is this cold… ▲The cute little razor is… rather scary!

And the second of which is this rather insane looking… His standard Smiling Expression is also perfect for the Joker’s personality that seems to see through everyone he comes in contact with! (/ω＼) ▲ The electroshock tools are also included! From the movie ‘Suicide Squad’ comes a Nendoroid of the cute, crazed supervillain – Harley Quinn! The Nendoroid has carefully captured all of Margot Robbie’s charm while still keeping to the cute Nendoroid design making her one of the cutest Nendoroids ever based on a live action movie character!

She comes with three different face plates, all of which feature her unique make-up and capture her captivating personality. The face plate to display her blowing bubblegum can also have the bubble part removed creating a fourth way to put her on display!

The figure is also fully articulated allowing you to easily place her in poses that come straight out of the movie as well as create your own original poses – she also comes with a baseball bat to recreate combat scenes! Be sure to add her to your collection and enjoy the crazy Harley Quinn by your side!

The crazed supervillain in Nendoroid size!

The female villian with a cute and innocent look that you shouldn’t be fooled by! She will do pretty much whatever it takes to get what she wants! The punk-style outfit from the movie has been faithfully converted into Nendoroid size with very nice attention to detail! ♪ All the accessories on her outfit have also been included! Also note the metallic appearance of the belt and bracelet! (/ω＼)

The Nendoroid is fully articulated with joints in the knees and elbows which allow for all sorts of poses, and she also comes with bubblegum parts for this rather mischievous looking pose! ♥ ▲ The colouring of her thin stockings is also lovely! ♪

The bubblegum parts can also be removed from this expression which you can see on the two-shot with Joker near the top of the blog! It gives her a rather playful appearance!  (´□｀｡)

You’ll also notice her left and right eyebrows are at slightly different heights which is perfect for battle poses where she is provoking the enemy!★ ▲ Plus that make-up is just so cute!

Last but not least, she also comes with this rather angry looking expression which when combined with the included baseball bat makes her look ready to go out and whack whoever might be in front of her! Recreate all sorts of different scenes in Nendoroid size! (σ・∀・)σ

Both currently up for preorder! ♪

Plus there are also ‘background sheets’ which can be displayed behind your Nendorids for a little extra atmosphere included when you preorder from the GOODSMILE ONLINE SHOP! ヽ(ﾟ∀ﾟヽ 三 ﾉﾟ∀ﾟ)ﾉ