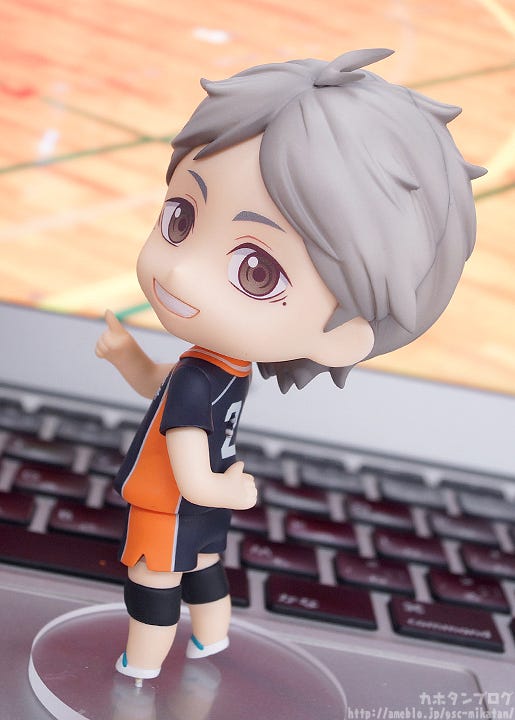 Today I’m going to be taking a look at…
Nendoroid Koushi Sugawara! From the popular volleyball manga series with a third anime season on the way, ‘Haikyu!!’ comes a Nendoroid of Karasuno High Boys’ Volleyball Club’s vice captain known as the ‘Indomitable Setter’ – Koushi Sugawara! He comes with three face plates including a standard face, a cheery smile as well as a huge smiling face for cheering on his teammates!

the ‘Indomitable Setter’ with a kind and gentle personality! The vice-captain of Karasuno High Boys’ Volleyball Club is joining the Nendoroids!

His gentle grey hair, short eyebrows and even the mole by his eye have all been faithfully included on his cute Nendoroid face! He also comes with a volleyball to hold which can also be posed on it’s own little stand to display the ball flying through the air during a match! ε=(｡・д・｡) ▲ I love the way his open hands have been sculpted…!

This is the ninth Nendoroid in the Haikyu!! series! Let’s take a look at all the others in the series so far… (´□｀｡) I think that makes this the longest running JUMP Nendoroid series! Looking at them all makes me want to rewatch the series!

Anyway, let’s get back to Suga-san with a look at his other face plates and optional parts! His second expression is this…
Cheery Smile!☆ This pose can be seen both in the manga as well as on the Vocaba card game! It captures his friendly personality so perfectly!!  It’s a little hard to see from this angle, but his hand is also sculpted to be making that ‘sign’!

The playful smile fits him so perfectly! Moving onto his third expression…
“It’ll be fine! Let’s break their streak!”

A Smiling Face to cheer on his team!!

This is the very face that allows the Karasuno volleyball team to put out even better than their best!! Just looking at it I also feel inspired to do anything!! Placing him with any other characters from the series instantly creates an amazing scene that looks like it came straight from the series! That goes to show just how important Suga-san is in the series!! (*ﾟ∀ﾟ)*｡_｡)

You can also come up with all sorts of other poses by swapping out expressions and parts!★ ▲ He’ll be ready to cheer you on from the day he joins your collection!

The photo above is just his standard standing pose with the cheery expression and his arm placed out forward… it looks like he is waiting for a fist-bump!

As with the previous Haikyu! Nendoroids, he also comes with a stand made in the image of a volleyball court! ♪ The stand is also slightly larger than normal allowing you to display two characters together with ease! There are already five members from the Karasuno High Boys’ Volleyball Club!! Hopefully with more to come!! ♪

There are also members of other teams currently in development!

Be sure to add the cute Suga-san to your collection! Preorders are open as of today!!

Preorders from the GOODSMILE ONLINE SHOP will also include a Nendoroid Plus Rubber Strap: Koushi Sugawara Indomitable Setter Ver. as a bonus! (∩・∀・)∩

By the way, those who ordered this cute Nendoroid will find him in their collections shortly! He shipped out today! Be sure to give him lots of love!! (｡･ω･)ﾉﾞ