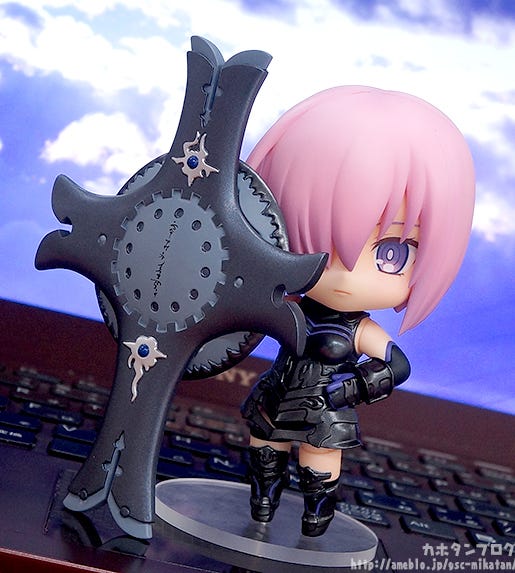 Anyway, today I’m going to be taking a look at…
Nendoroid Shielder/Matthew Kyrielite! From the hugely popular smartphone game ‘Fate/Grand Order’ comes a Nendoroid of the Shielder servant, Matthew Kyrielite! She comes with three face plates including her standard expression, a valiant combat expression as well as a smiling expression with a slight blush on her cheeks.

Optional parts include her Virtual Noble Phantasm ‘Lord Chaldeas’ and she also comes with an effect film sheet to faithfully recreate the use of the Noble Phantasm based on the scene from the game! Be sure to add Nendoroid Shielder/Matthew Kyrielite to your collection!

“Heading into combat. Give me orders, Master.”

From Fate/Grand Order comes a Nendoroid of the beautiful Shielder servant from Chaldea – Matthew Kyrielite! The kind and gentle Mashu to keep by your side to shield you from anything that might come your way! Although as you can see from the first photo she also comes with a serious, composed look perfect for battle scenes as well! ♥

She obviously comes with other parts to show the gentle side of her, which we will get to shortly… but first let’s take a closer look at her outfit and the sharp sculpting of the dress that almost looks more like a suit of armor due to the design! ▲The care skin you can see through the gaps is also lovely!

The paintwork also has a heavy, metallic appearance that contrasts against her skin really nicely! The gloves and boots are also highly detailed down to the various little accessories on them, and just look at those cute little fingers!

Obviously it’s not just her outfit that looks great though – the clear purple eyes have a kind of wistful feel to them and her hair looks so smooth and silky! Plus her lovely body looks just as amazing in Nendoroid size! ▲ Even though she doesn’t show much skin there is something sexy about her design!

Along with the cool and composed standard expression with her mouth closed, she also comes with this valiant…
Combat Expression! The open mouth as if shouting at her opponent and those sharp eyes focused on the battle ahead! Mashu is in full combat mode now!!  ( ･ㅂ･)و ̑̑ ｸﾞｯ !

Plus as you can see the reverse side of her shield is also fully detailed! ▲ Even in Nendoroid proportions the shield has quite an impressive size!

She also comes with a special Effect Film that allows you to display her making use of her Noble Phantasm, Lord Chaldeas! ♡₍₍ ◝(・ω・)◟ ⁾⁾♡ ▲ The effect film has a nice transparent appearance!

Let’s move on to her third expression part… The difference between this expression and the combat expression is such a huge gap, but they both capture different sides of Mashu so nicely! She is so lovely!! The ever so slight blushes in her cheeks also capture her sincere feelings for her master!!

Plus if we take a look from the back…! ♫ She comes with special parts that allow you to easily pose her with her arms held behind her in this adorable pose!! Plus, the right eye that is normally covered up by her hair is of course faithfully on all the expressions, so take a look once she joins your collection! ☆ ▲ This gentle gaze is enough to get me through a rough day!

Enjoy everything from the gentle to the valiant side of Mashu!
Nendoroid Shielder/Matthew Kyrielite!

She’ll be up for preorder from the 23rd August!