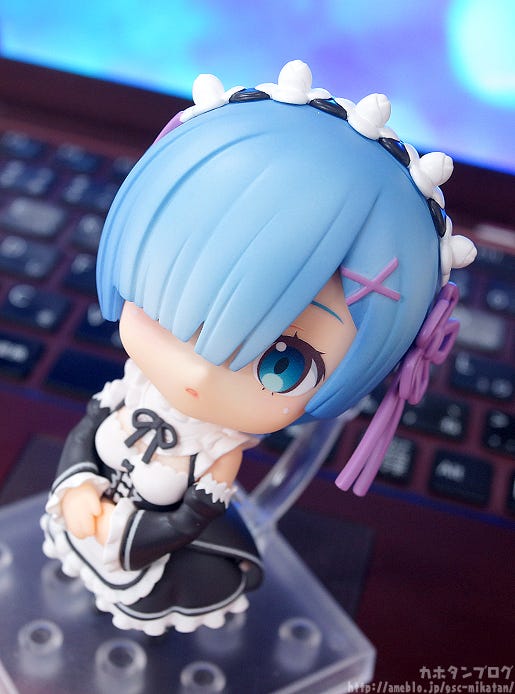 I spent the weekend at home getting to know my air conditioning better! We’ve moved into the late Summer and the heat is quite unbearable at the moment! The hot days are due to continue for awhile, so make sure to drink plenty of liquids and look after your body! Especially if you’re going to Comiket this weekend!!

Anyway, today I’m going to be taking a look at…
Nendoroid Rem! From the anime series ‘Re:Zero -Starting Life in Another World-‘ comes a Nendoroid of Rem, one of the maids at the Roswaal mansion. Her cute maid uniform has been carefully converted into Nendoroid size and her standard expression is based on the scene where she first met Subaru and had a bit of an untrusting, cold gaze. She also comes with a smiling expression for much more cheerful poses!

Her third expression is the memorable ‘oni’ expression from the series, and she also comes with alternate front hair parts with a horn in order to fully recreate the oni form. Her morning star is also included in two different forms – one with a static chain for dynamic action poses as well as one with a real chain. Enjoy all sorts of different sides of Rem with the Nendoroid!

The younger of the two maids that serve at the Roswaal mansion, Rem is joining the Nendoroids! ♥

Her calm and composed eyes and that cute yet defenceless mouth that is slightly open… her expression from the series has been captured so effectively in Nendoroid size! The slightly mysterious air about her character has also been preserved very nicely!

The purple flower-shaped ribbon in the hair as well as amazing frills on the white and black maid outfit have all been sculpted so beautifully! The tailcoat design on the back also looks lovely! ♪ ▲ The accessory around her neck is also lovely and detailed! ☆
Rem also comes with a variety of interchangeable arm parts such as bent arms allowing for more poses suited to her character! ε=(｡・д・｡) ▲This angle shows she does have quite a noticeable bosom!

At first Rem is the composed maid with a rather sharp tongue… but fans of the series will know she has various other expressions as well! So let’s move on to her second expression…
A lovely smiling expression! ♥ “Let’s start from here. From step one… no, from zero!”

This smile makes everything better!! (´□｀｡)

Just remembering this scene makes me feel all happy inside! But then we move onto the other side of Rem’s character… an expression to prove that she is an oni with incredible power!! Plus she also comes with alternate front hair parts with her oni horn showing to complete the transformation!

The hair not only has the horn, but also no longer completely covers up her left eye, faithfully recreating the change from her calm human form into the chaotic oni form! Just look at those maddened eyes and the grinning expression!

Plus, her ‘morning star’ weapon comes in two different versions – one with the chain locked in place for some dynamic scenes of her swinging the chain around, as well as another with an actual chain that allows you to move the weapon around into all sorts of poses! ★ ▲ Posed with the weapon and her standard face recreates the ‘calm before the storm’ pose before she goes into oni mode! ♪

Enjoy Rem by your side in whatever pose you think suits her best! From the cool and composed maid, to a cute smiling Rem or the rampaging oni version! Be sure to add her to your collection! She’ll be up for preorder from tomorrow!!★

Be sure to check out the GSC Site for more information and official photos tomorrow!

Plus, those who are going to Comiket 90 this weekend can also get their hands on this lovely Rem Tote Bag!! (｡･ω･)ﾉﾞ The back reads “It would have been best if this had ended without you ever realizing…”!

This product will be on sale for ¥2,500 with a maximum of two per person! There will also be goods from various other series, so if you do come to the event be sure to stop by the GSC booth!!