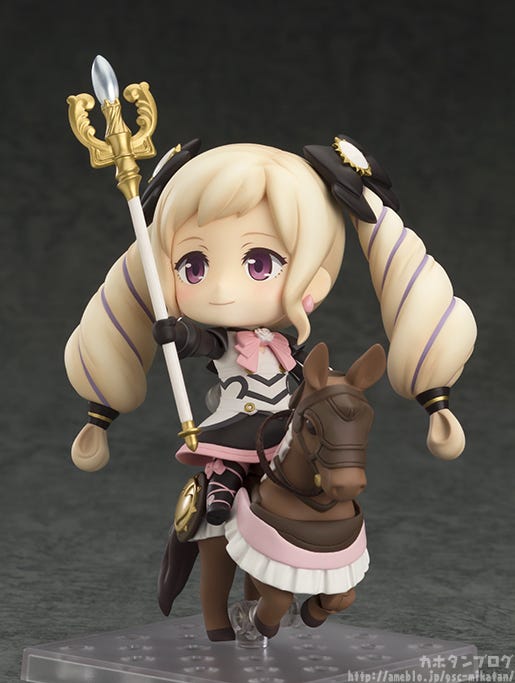 I can’t believe we’re already in August! I have to do something summerish soon! At the very least I’ll get some shaved ice sometime this week! Anyway, today I’m going to be taking a look at…
Nendoroid Elise
!♡ From the popular game ‘Fire Emblem Fates’ comes the bright and cheerful youngest child of the Nohr royal family – Elise! She comes with three different face plates including a standard expression, a cute smiling expression as well as an upset expression with her cheeks puffed up.

The youngest child of the Nohr royal family is joining the Nendoroids! ♪

The unique rolled appearance of her blond hair as well as her innocent, friendly eyes are so lovely! She holds a ‘Heal’ staff in both hands which has also been carefully shrunk down to Nendoroid size! Her pink, white and black outfit is also nicely detailed down to the little accessories and ribbons!!

Plus she even comes with a horse in matching colors! Not only can Elise actually be posed riding on the horse, but the front legs are also articulated allowing you to pose her galloping along the battlefield! ♪

It’s more like an entire second figure rather than an optional part! Quite similar to the Pegasus previously included with Nendoroid Sheeda: New Mystery of the Emblem Edition!

She also comes with some sparkling healing effect parts! ☆ Perfect for her starting class as a Troubadour! Ready to head out and heal her allies! (｡･ω･)ﾉﾞ

She also comes with this adorable expression which would make anyone want to protect that innocent smile of the young princess!! Here it looks like she is gently petting her horse – she could be complimenting her on a good job out in the battlefield, or just cheerfully talking to her as a close friend! Either way, the smile really captures Elise’s gentle side!

As such a cute character I’m sure there were many players like me that did whatever they could to keep Elise safe on the battlefield to help protect this smile from any danger! (੭ु ›ω‹ )੭ु⁾⁾

Onto her third expression…!☆ An upset expression to capture the more childish, spoilt side of her personality!

The way her cheeks are all puffed up is so adorable!! Elise plays an important role in the series, but she also needs to have an expression that captures her young age! (*’∀’人）

As you can see, the various parts and expressions allow you to enjoy all sorts of different scenes from combat down to everyday scenes! Enjoy the adorable charm of the young Nohr princess in your Nendoroid collection!

She’ll be up for preorder from the 5th August! ☆

Be sure to see the Good Smile Company Site for more details tomorrow!

Plus, Nendoroid Corrin (Female) is also in the works!