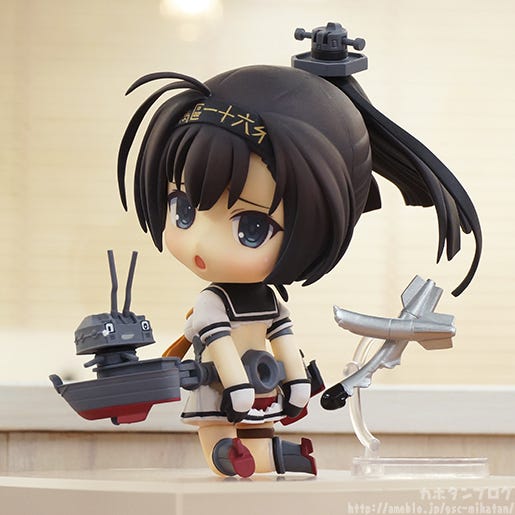 The 28th Nendoroid from KanColle, and also the first ever anti-aircraft destroyer to join the series – Akizuki is joining the Nendoroids! She has a mostly white sailor uniform outfit which contrasts with her black hair beautifully! I also personally really like the design of her outfit around the hips – it looks a bit like she is wearing a corset! （＾ω＾＊）

The embroidered ’61st Destroyer Division’ letters on her ‘pennant’ headband are painted on with a lovely gold to really stand out! The adorable little 10cm gun turrets are also hard to ignore, but I’ll get into more detail about them later!

▼ This is how she looks from the back! ▲ The ship parts that act as a hair clip are so cute! ♪

The way the ponytail comes out in a fan-like shape is rather unique! The huge torpedo launcher on the back of all the destroyers illustrated by Shizuma is also included! ▲ Note the little anchor marks where the headband is tied at the back! ▲ Which can be removed from the ship parts!

There are cylindrical openings on either side of the ship parts that allow you to insert and remove the turrets! Plus there is a little hole in his bottom as well as a special stand which means… ▲ You can pose him jumping up in the air!

Moving on, she also comes with some food parts! ▲ Rice balls and pickled radish!
These were chosen based on some of her lines from the game! The dish they are on is shaped like a bamboo leaf for some bonus style points! ♪ She also comes with some canned beef based on this line!! To think that canned beef would be considered splurging…! (´；ω；｀) ▲ The can reads ‘canned beef boiled with soy sauce’! I borrowed the abyssal aircraft from Nendoroid Wo-Class for her to battle against! As she is an anti-aircraft ship special effects are included to recreate the cut-in effect for anti-aircraft attacks in the game! Firing parts for the turrets are also included and she comes with a combat expression to being everything all together! The three-layered anti-air explosion part comes with its own arm stand to easily position wherever you need it! She also comes with torpedo firing effect parts for battles on the sea as well!

▼ But if she isn’t careful… She also comes with parts to recreate her cute half-damaged pose holding her bottom! An alternate body is included with the clothes on her back are torn up, she comes with a special face plate to recreate the pose and there is even a damaged version of the 10cm turret included to display beside her! ▲ Note the little propeller marks on her bottom! (ﾟＡﾟ;) ▲ Just as cute from the front!

The ship parts on her hips are very nicely articulated allowing you to place them in various poses like this one! It’s almost like the ship parts are protecting her!

▼ Plus, orders from the GOODSMILE ONLINE SHOP will include…

▲ A ‘Nendoroid Akizuki’ Special Box Sleeve & Special Nendoroid Base as a bonus!

Be sure to consider it when purchasing! ╭( ･ㅂ･)و