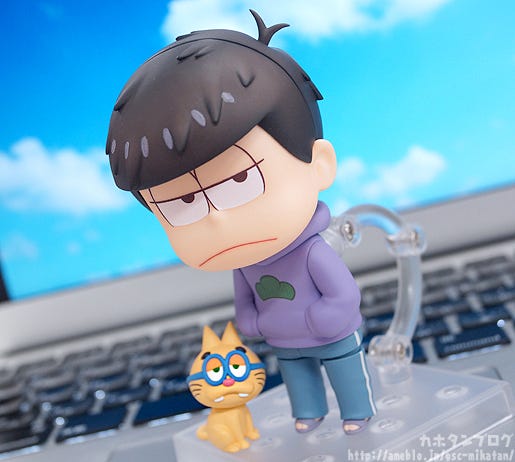 The yearly health check-up for GSC staff is coming up soon… as soon as I think about them drawing blood I start to get nervous!

Anyway, today I’m going to be taking a a look at… “Me? I’m the fourth son of the Matsuno family – Ichimatsu Matsuno.”

The sarcastic Matsuno brother who always takes things at his own pace and finds the best of friends in cats is joining the Nendoroid series!

The Nendoroid captures his character nicely with the slouching back, needlessly large hoodie, sandals, slightly messy hair and those sleepy half-closed eyes!! Not to mention that the ESP Kitty that played a rather big role in episode 5 of the series is also included to display beside him! △ ESP Kitty’s neck is fitted with a joint for slightly different poses!

Ichimatsu’s standard standing pose has the back sculpted at a curve to recreate his slouch!! (｡･ω･)ﾉﾞ △ The messy look of his hair also looks great!

Optional parts include a cat toy for the cat-loving Ichimatsu… … as well as sitting parts to let him sit and pay with ESP Kitty!

Not only do these parts work great with the kitty, but when you display Ichimatsu together with the other brothers it really brings out his laid back personality in comparison with them! ♪

Plus, he also comes with this expression! The expression from the end of the rental girlfriend episode! The shadows around his eyes have been specifically colored a very dark color to keep that comically dark appearance even as a Nendoroid! ♪

The mask can also be removed… To reveal a kind of scheming expression! (/ω＼)

I’m a little worried for as to what happened to Karamatsu after this photo was taken! As mentioned above the mask can be removed, but that also means that you can also attach it on to the other brothers as well!! △ The mask fits in between the head and body parts to be hold in place!

I think it also looks really nice on Ichimatsu’s standard expression too! △ It looks like he is about to lift the mask just to say something sarcastic! ♡

Just like the other Osomatsu-san Nendoroids he also comes with a blank expression as well as a set of expression stickers allowing you to choose what third expression you want for him! ★

△ You can even recreate all sorts of popular scenes!

By the way! You can also swap hand parts between characters to have them hold each others items! This allows for even more fun and original and interesting situations to be had!  ( ･ㅂ･)و ̑̑

The Nendoroid series also allows you to swap head parts around, which means you can even recreate incidents like this! It’s not quite perfect fashion… but you can even dress him up in Karamatsu’s outfit and glasses!  (ΦωΦ 三 ΦωΦ) △ He is trying to practice his pretentious smile to be more like Karamatsu?

Enjoy the Osomatsu-san world right at your fingertips! They are great by themselves but so much more fun with the whole Matsuno brothers collection! (●´ω｀●)

A Nendoroid of the fourth Matsuno brother!

Orders from the GOODSMILE ONLINE SHOP will include a special round base as well as two additional blank expressions! ☆ Plus don’t forget that Nendoroid Choromatsu Matsuno will also be up for preorder at the same time! ヽ(*・ω・)人(・ω・*)ノ Waiting to meet up in a sunny cafe!